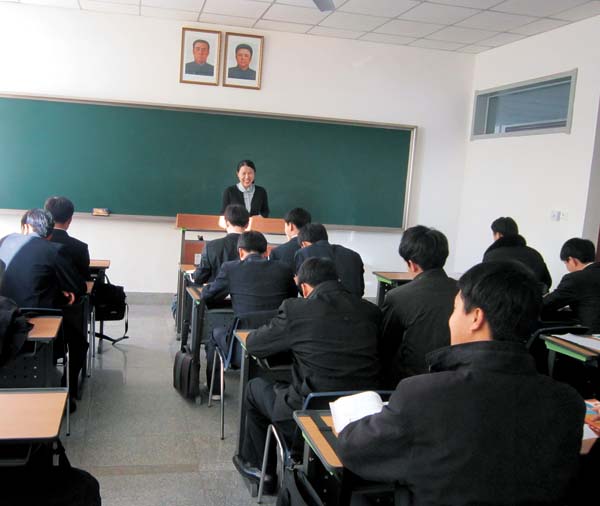 Suki Kim teaches English to students from the privileged class at Pyongyang University of Science and Technology in December 2011. Provided by Suki Kim

A Korean-American writer has published a new book documenting her experiences in North Korea teaching English to the children of the regime’s powerful elite.

Suki Kim, the author of the award-winning novel “The Interpreter,” entered the country in 2011 by posing as a missionary. While there, she worked as a teacher at the Pyongyang University of Science and Technology from July to December 2011. 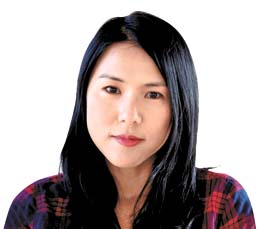 Kim taught English to 270 boys from Pyongyang’s elite and documented in her new book, “Without You, There Is No Us: My Time with the Sons of North Korea’s Elite.”

The title was borrowed from the lyric of a song praising Kim Jong-il, who ruled North Korea when she resided there. Kim Jong-il is the late father of current leader Kim Jong-un.

The book vividly portrays college life in the Communist nation and details the writer’s experiences over six months, eating three meals a day and playing basketball with the sons of the North’s privileged.

According to Kim, all the nation’s universities were shut down for the entirety of 2011, the 100th anniversary of the North Korean founding ideology of Juche, or self-reliance. Instead, students were sent to construction sites in order to build a stronger, richer country. The only exception, she recalled, was the 270 students at the all-male Pyongyang University of Science and Technology, located just outside Pyongyang, the capital city, in a walled compound.

In her book, Kim provides a long list of rules that she was required follow while living in the North.

“Living in Pyongyang is like living in a fishbowl. Everything you say and do will be watched. Even your dorm room might not be secure. They could go through your things. If you keep a journal, and if you say something in it that is not complimentary, please do not leave it in your room. Even in your room, whatever you say could be recorded. Just get in the habit of not saying everything that is on your mind, not criticizing the government and things of that sort, so you won’t slip,” she writes.

Kim said she often jotted down notes for her book and recorded them later using a computer. However, she never left any data on her computer’s hard drive and kept everything on a USB stick.

She said she did not show too much interest in the outside world nor explain to her students in detail about the Internet. She also shied away from making any political remarks, fearful she may be immediately deported.

Perhaps most notably, Kim Jong-il died on her last day as a lecturer, she said, closing a chapter in North Korea’s history. “Without You, There Is No Us: My Time with the Sons of North Korea’s Elite” will be translated into Korean and published in the South soon after.

The Pyongyang University of Science and Technology, where the writer taught, is the only privately funded university in North Korea, jointly established by the country’s education ministry and South Korea’s Northeast Asia Foundation for Education and Culture.

The school opened in 2010 and receives significant financial support from Koreans living abroad and the South Korean Protestant community.

It offers programs in electrical and computer engineering, agriculture and life sciences, and international finance and management.

Born in Seoul, Kim moved to the United States when she was 13 years old and received her bachelor’s in English, with a minor in East Asian literature, from Barnard College in New York.

Her first novel, “The Interpreter,” won the PEN Beyond Margins Award and the Gustavus Myers Outstanding Book Award.