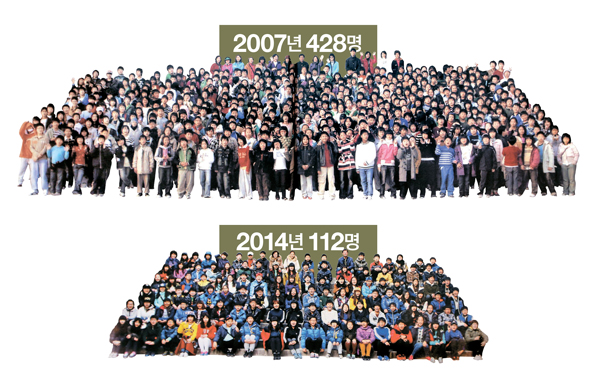 Unless Korea’s birthrate starts to increase, the population could be no more by 2750.

That prediction may sound slightly exaggerated, perhaps even fictional, but signs of a bleak future for the country have already begun to surface.

If the current birthrate remains unchanged, Korea’s population will be halved by 2084, according to a report by the National Assembly Research Service. By 2136, the population will be just 10 million, one-fifth of what it is now; and by 2503, there will only be 10,000 people living here.

At those rates, the Korean race could very well be extinct by 2750, the report says.

But this study isn’t the only pessimistic forecast on the nation’s future. David Coleman, a demographer from Oxford University, already projected in 2006 that Korea will be the first nation in the world to disappear, and the problem is now perceived to be more serious than ever.

In the 1970s, the total fertility rate in the country - the average number of children born to a woman over her lifetime - was 4.53, and birth control was one of the key aspects of the government’s population policy.

The numbers are already reflected in society. More people continually chose to focus on their careers rather than on family and marriage, and that shift has led to a surge in single-person households. Still, more married couples are choosing to wait longer to have children, or just forego parenthood altogether.

That is true for Incheon residents Jo Jae-cheol, 40, and Kim Hyo-ni, 46, who have been married for 15 years. The two are both freelance workers and have no children, and stated that they have no plans to have any later on.

“Sometimes we don’t have work for a couple of months, and it is hard for us to plan regular spending every month, like childcare fees,” Jo said. “We treat our jobs like our children.”

The couple is just one of many who don’t consider children a priority in life.

Seoul’s eastern Gwangjin District, for instance, is a popular neighborhood for many newlyweds, mostly because of its easy access to the trendy Gangnam area and extensive variety of housing options. Since 2000, an average of 2,800 couples have registered their marriages in the district each year.

Jangan Elementary School in the district’s Gunja-dong used to be one of Seoul’s major schools, with about 1,000 graduates annually. And even though the number of its students decreased as more schools opened up in the area in the ’80s and ’90s, it still had more than 500 graduates annually.

That, however, is a thing of the past. The school’s numbers have fallen in line with the decrease in children. In 2007, the school had 428 graduates, and there has been a consistent decline each year. This year, Jangan Elementary saw 112 graduates, and next year there will be a mere 103.

“There are new schools opening up in the area, but the fundamental reason is the falling birthrate,” said Vice Principal Bang Mi-ran. “Other schools in Seoul are having similar problems.”

In fact, many in the capital have merged with other institutions or shut down entirely due to a lacking student body. The situation is worse in provincial areas. In South Jeolla, there were 37 elementary schools this year with no incoming first-grade class.

Yet even though the plummeting birthrate has been identified as one of the biggest threats to the country, no signs of improvement have been seen over the years.

According to a survey by the Korea Institute for Health and Social Affairs, fewer women believe that having a child is a vital part of their lives. In the agency’s 1991 poll, which included women between 15 and 44 years old, 90.3 percent responded that having a baby was essential. However, that rate had drastically dropped to 45.5 percent by 2012 in the same survey.

But many young couples today say they are hesitant to have a child because of the high economic considerations.

High child care expenses and school tuition have also discouraged them from expanding their families, and those who are determined to have children argue that the government isn’t doing enough to support them.

“The government gives you just a couple hundred thousand won for child care expenses,” said a 30-year-old married woman who resides in Gangnam District, southern Seoul, “and they encourage you to have a child. Isn’t that irresponsible? How many couples would be convinced to have a baby because of that money?”

Many experts have recommended reinforcing governmental support for couples going through fertility treatments.

“They are the ones who are determined to have a child,” said Hwang Na-mi, a researcher with the Korea Institute for Health and Social Affairs. “If proper support and treatment are given to them, we will see an immediate and positive impact in the birthrate.”

New Politics Alliance for Democracy (NPAD) Rep. Yang Seung-jo mentioned France as an example of how other advanced countries have successfully turned around declining birthrates, adding that these cases must be studied more carefully and budgeted more realistically.

France’s policy on assisted fertility treatments is considered generous compared to other countries in Europe. In vitro fertilization (IVF) is fully covered - up to four attempts for any woman until she turns 43 - as well as six tries at intrauterine insemination. Those efforts, in part, have contributed to the rise in the country’s birthrate, which went up from 1.65 in 1993 to 2.02 in 2010.

Couples trying to beat the odds mostly cited the high costs of fertility treatments as their biggest challenge. One 40-year-old woman, married for 12 years, said she was diagnosed with fertility problems in 2006. Since then, she and her husband have undergone 10 IVF treatments, spending more than 40 million won ($37,572), though none were successful.

The government paid just a fraction of the cost, at 4.5 million won, and the couple was forced to take out a loan to cover the remainder.

According to a 2012 study by the Korea Institute for Health and Social Affairs, 62.9 percent of the couples diagnosed as having fertility problems gave up on treatments, and 14 percent pointed to financial strain as the primary reason.

While the government pays for some treatments, the overall support is not sufficient, many say.

To qualify for the government’s program, a couple’s monthly income must be 5.75 million won or less. For a double-income family, only half the salary of the spouse with the lower income will be factored. For up to six IVF treatments, the government pays a maximum of 7.2 million won.

But because fertility treatment is not covered under the national health insurance program, one IVF treatment can cost anywhere from 3.5 million to 6 million won. And even with government support, a couple needs to pay about an additional 2 million won, and that expense often snowballs when a woman has multiple rounds.

Korea spent nearly 15 trillion won this year to increase the birthrate, according to ruling Saenuri Party lawmaker Shim Jae-chul, up from 2.15 trillion won in 2006. The policy - focused on providing free child care services for children up to 5 years old - is ineffective and the government must come up with a better plan, the lawmaker added.

But aside from child care and fertility assistance, tax exemptions and employment benefits are just as critical for new mothers, experts say. Since 2012, France has spent more than 5 percent of its gross domestic product (GDP) on a series of assistance programs for families with children, including monetary support, tax exemptions and housing aid. The system also provides assistance to all types of families, including unmarried couples with children.

Experts agree that Korea must follow a comparable path and break away from deeply rooted, old-fashioned Confucian beliefs about cohabiting unwed couples.

Encouraging women to marry and give birth at younger ages is also important, they say.

Over the past decade, even though the birthrate among married women increased slightly, the total birthrate actually decreased because so many women are choosing to wait to marry and have children.

Last year, the average age of new mothers was 31.8 - four years older than two decades ago, when it stood at 27.5.