Learning from a catastrophe

Learning from a catastrophe 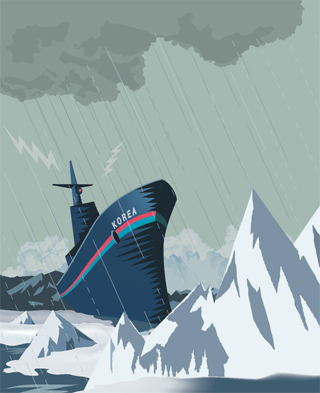 2014 will go down in history as a bad year for Korea - and possibly a tipping point into an uncertain, vulnerable and less prosperous future.

It was a year in which a tragedy on the sea touched off twin economic and political crises that grew ever more intertwined. They added up to a snowballing disaster, unquestionably man-made, that forced President Park Geun-hye to admit that Korea was in need of major course correction - a gukga gaejo, or national “overhaul” - during her term.

To celebrate the 14th anniversary of its founding, the Korea JoongAng Daily will run a series of stories in today’s edition and over the next two weeks examining the country’s annus horribilis, its economic and political repercussions, and how the sinking of a single passenger ferry might provide a wake-up call that changes the Korean Way - hopefully for the better.

The Sewol, a 20-year-old second-hand ferry from Japan, was heavily overloaded with cargo, light on ballast water and probably top heavy when it left Incheon for Jeju on the night of April 15. On board were 33 crew and 476 passengers, including 325 ebullient students from Danwon High School in Ansan, Gyeonggi province, on their traditional junior year outing.

The craft’s most recent safety inspection was in February, which it passed. Maybe the Sewol shouldn’t have set off at all: Many ferries in Incheon had canceled trips due to bad weather.

But sail it did, and the following morning at around 8:48, shortly after breakfast, something happened in the waters off Jindo County. The ferry turned too fast and cargo may have shifted below deck, possibly because vehicles in the hold hadn’t been properly chained down. The ship started to list.

The crew broadcast warnings telling passengers to stay below deck. Students called and texted relatives. One even called the national emergency service number to say, “I think it’s sinking.” His call came three minutes before the Sewol itself sent a distress call.

In short order, the captain and 14 crew scurried off the Sewol to safety. The Coast Guard stayed at a passive distance watching the ship turn turtle.

Only 172 people survived, mostly by scrambling into private boats that came to help. A few students smoking on the deck jumped into the water and were fished out. A total of 294 people are confirmed dead and the bodies of 10 still missing.

It was a slaughter of innocents, and it soon became abundantly clear who killed them: the rotten-to-the-core adult world of contemporary Korea. The company that owned and operated the ship was controlled by a greedy family with a lurid past that included a mass suicide at a cult that may have been murder. The underpaid captain and crew knew how poorly maintained the ferry was, so it was no wonder some abandoned ship. The inspection agency was in the pocket of the ship’s owners. The Coast Guard was a national joke, headed by a political appointee from the police with no experience at sea.

As the details poured out, they gave an endoscopic view of the inner workings of Korean society, the corner-cutting, mutual back-scratching, what’s-in-it-for-me Korean Way of getting ahead or just getting by, where doing well is far more important than doing good.

The 250 17-year olds who died never had a chance. Or they had a single chance: disobeying the adults’ command to stay in their cabins. But young Koreans listen to their elders. That’s how they eventually learn to navigate the slippery byways of the Korean Way.

In the aftermath, the whole society went into mourning, or so the newspapers said. It was more like a guilty funk. People were so nervous about being seen enjoying themselves that they stayed home from restaurants, movie theaters and malls for weeks. The Sewol tragedy started hurting the Korean economy in a way normally reserved for disasters like earthquakes that cause huge physical destruction. Economic growth fell from 0.9 percent in the first quarter to 0.5 percent in the second.

It didn’t help that Korea’s sizzling exports of products like smartphones started to sag. Samsung Electronics’ operating profit, which peaked at 36.8 trillion won ($34.5 billion) in 2013, fell 60 percent in the third quarter of this year compared to a year earlier.

The big, frightening question: Was this the start of a low-growth economic future? Was Korea falling into the Japanese pit of deflation, an aging population and an industrial sector that was fast losing its mojo?

The politicians managed to make things worse. Both the ruling Saenuri Party and the opposition New Politics Alliance for Democracy agreed to pass a law requiring a full investigation of the causes of the accident and the miserable rescue attempt. But they couldn’t agree on the specifics. The NPAD refused to cooperate in passing any other legislation first - including economic deregulation bills designed to help the post-Sewol economy.

For 150 days, Korea’s hard-won democracy was gridlocked in a way that had never occurred before: No legislation was passed from May 2 to Sept. 30.

Some pundits asked legislators to refund their salaries.

Others wondered if Korea’s democracy itself was in need of an overhaul.

In this anniversary series, the Korea JoongAng Daily examines the flaws in Korean society exposed by a year of crises - and what kind of repairs should be made to the Korean Way.