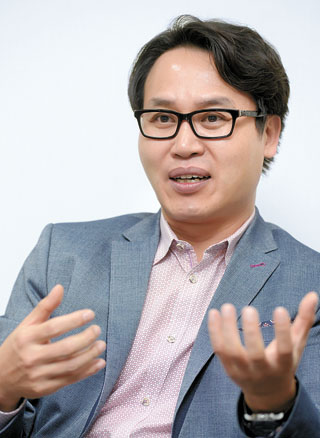 Multinational pharmaceutical companies usually focus on selling their own medical products in a certain market. But Mundipharma does business the other way around, selling Korean-made products abroad.

In March, the company signed an agreement with Korea-based bio-medical company Genewel to market the moist bandage Medifoam overseas. In June, the Mundipharma won exclusive rights for Medifoam. The product was released in Malaysia in September under the name BETAplast.

The Korea JoongAng Daily sat down with Lee Jong-ho, Mundipharma’s area director for Korea and Southeast Asia, to discuss the company’s foray into a new market and the details of its deal with Genewel.

Q. What led Mundipharma to decide to sell Medifoam abroad?

A. This is an achievement that was made possible by both Korea’s advancements in medicine and Mundipharma pursuing partnerships and cooperation in carrying out business strategies. Medifoam is a prime example that shows Korea’s sophisticated medical technology. But there are other medicines with distinguished features. Even if they are competitive, they will likely face limitations in growth if they are only sold in Korea. So, there is a growing need to introduce them to overseas markets. Mundipharma has played that role by providing marketing for advanced products.

How will Medifoam be marketed?

Under the agreement, the wound dressing will be sold in 100 countries, but the process of licensing and medicines varies from one country to another. Thus, the release date also differs. In September, the wound dressing was launched in Malaysia. This month, Vietnam and Thailand will have Medifoam launched locally.

So far, many major multinational pharmaceutical companies primarily focus on selling their own products. But what we are doing is different. We are exporting Korean products abroad. I believe that we can contribute to enhancing and promoting the competitiveness of Korean technology and companies.

Many smaller pharmaceutical companies often seek different local agencies for each country to market their products. What’s the difference between this and Mundipharma’s approach?

When using local agencies, it is easy to lose consistency in promotion and marketing from one country to another because different parties are involved. First of all, we use a vast array of “intelligence” that we gather. Each local branch already has knowledge in their market and distribution channels, so it is easy to efficiently conduct business. Second, we can also have consistency in promoting the product so that we can establish a solid brand image through centralized marketing.

What distinguishes Medifoam from other products?

Medifoam is a polyurethane hydrocelluar dressing that provides a moist environment for the wound area to promote proper wound healing. Korea is known for its sophisticated polyurethane technology. The outer layer of Medifoam is made of a polyurethane film, which is impermeable to water and harmful substances. The inner layer is made of polyurethane film, which has micropores. Another important aspect is the size of the pores. The pores should be fine enough to prevent medical foam from sticking to skin. With this features, the product leaves fewer scars behind compared to gauze or bandages.

The product itself has been found to be more effective than similar products made in Europe and America. We often assume that the U.S. and Europe have the most advanced medical technology but it’s not always true.

Along with its effectiveness, we believe that Korea’s image will also help us establish a strong presence in Southeast Asia. Whenever I go to Southeast Asian countries, I am always surprised by how popular Korean culture is. People liken Korea to somewhere cool and advanced. So, we would like to further enhance Korea’s status through our products.