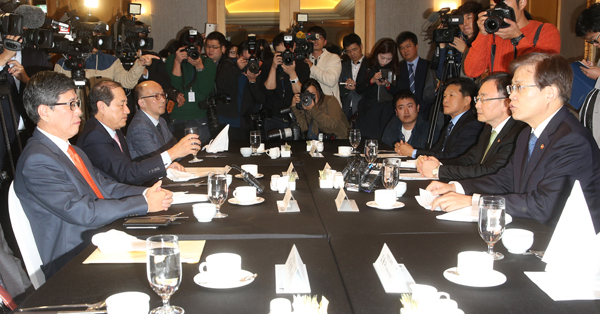 The minister and KCC chairman convened the executives of SK Telecom, KT, LG U+, Samsung Electronics and LG Electronics to discuss the Mobile Device Distribution Improvement Act at the JW Marriott Hotel in Banpo-dong, southern Seoul.

It was the first time the heads of the government agencies met with the business leaders since the law was implemented Oct. 1.

The law capped subsidies on the purchase of smartphones at 300,000 won ($282), but mobile carriers have been offering only 100,000 won to protect their profit margins, angering consumers.

In addition, retailers have been complaining their sales are plunging.

The government has responded by pressuring mobile carriers to offer the maximum allowable subsidy.

Minister Choi warned that the government will consider drastic measures if the companies continue to use the law for their own interests rather than to benefit consumers.

“If there is any effect of the new law, it should be related to consumer interests,” said the minister. “Mobile carriers and smartphone makers must take action to dispel the current misunderstandings about the intent of the law.”

KCC Chairman Choi added that the government cannot wait for the law’s positive effects to occur, as consumers and retailers already have experienced losses.

“Korean consumers have contributed much to the growth of Korea’s smartphone makers and mobile carriers,” he said. “But now they are turning their backs on these local businesses in favor of foreign smartphones.

“This will result in losses for both companies and consumers. We hope to gather wisdom and seek ways to resolve the problems that consumers and retailers are currently experiencing.”

Nevertheless, representatives of mobile carriers and manufacturers were apathetic.

Samsung Electronics CFO Lee said he hopes the issue will be resolved and the government will not be holding any more such meetings. A representative from a mobile carrier also said the law is not even helping mobile carriers.

The executives said they will come up with short- and long-term measures in line with the circumstances of each company, but gave no specifics.

SK Telecom CEO Ha said the special measures will not come easily and the LG U+ CEO Lee said he is studying ways to lower costs for consumers, but did not mention rate cuts.

Lee passed the issue to the manufacturers, saying Samsung seems to be investigating various measures.

“Internally, we have not discussed the launch prices of smartphones, but we have talked about the subsidies,” said Lee from Samsung Electronics.

“However, when we look at the launch prices by country, they do not differ much. From the perspective of consumers, the actual prices they pay are more important than launch prices. There are already many low and medium priced devices in the market.”

However, after the remark that the government might look for drastic measures as a last resort to resolve the problem, shares of the three mobile carriers SK Telecom, KT and LG U+ plunged.