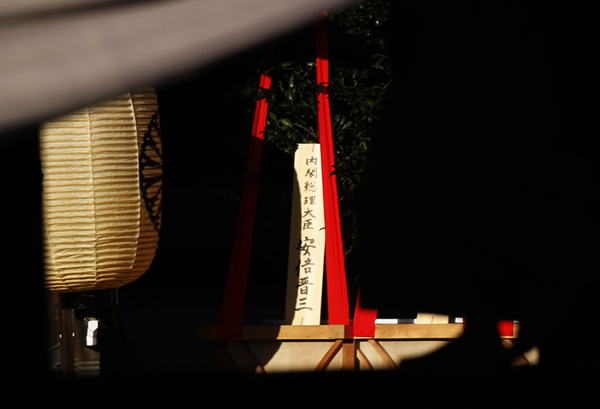 A wooden sign reading “Prime Minister Shinzo Abe” is seen on a ritual offering from the prime minister at the Yasukuni Shrine in Tokyo yesterday. [REUTERS/NEWS1]

TOKYO - Japanese Prime Minister Shinzo Abe sent a ritual offering to Tokyo’s controversial Yasukuni Shrine on Friday, a move that might complicate his push for a meeting with Chinese President Xi Jinping to improve frayed ties between the world’s second- and third-biggest economies.

A group of other Japanese lawmakers paid their respects at the shrine - seen by critics at home and abroad as a symbol of Japan’s past militarism - on Friday, the start of the country’s autumn festival, a Reuters witness said.

There was no sign of cabinet ministers at the shrine, although NHK public television said Health Minister Yasuhisa Shiozaki also sent an offering. A ruling party lawmaker tweeted that three ministers planned to visit on Saturday.

Expectations have been growing in Japan that Abe, who outraged Beijing and Seoul by visiting Yasukuni in person in December 2013, will be able to meet Xi for ice-breaking talks next month at an Asia-Pacific leaders summit in Beijing.

Signs of thawing relations have been growing, a reflection of the recognition on both sides that the chill was bad for business as well as raising the risk of an unintended clash that could escalate militarily.

Prospects for a leaders’ chat, however, are clouded by China’s demand for a signal that Abe will not make another pilgrimage to the shrine, where Japanese wartime leaders convicted as war criminals by an Allied tribunal are honored along with millions of war fatalities. On Friday, Abe sent an offering in the form of a small tree.

A public promise not to pay respects at Yasukuni again would be impossible for Abe, whose conservative agenda includes recasting Japan’s wartime history in a less apologetic tone.

However, Koichi Hagiuda, a ruling Liberal Democratic Party (LDP) aide to Abe, told Reuters this month that the prime minister could put off a visit if he judged it was in Japan’s national interests.

Hagiuda said the prime minister, now in Milan for a meeting of Asian and European leaders, was likely to refrain from visiting in person ahead of the November gathering in Beijing.

China also wants Japan to acknowledge the existence of a formal territorial dispute over tiny islands in the East China Sea controlled by Japan but also claimed by Beijing, according to Japanese lawmakers recently in Beijing.

Japanese diplomatic experts ruled out such a move but said it was possible the two sides could find a diplomatic formula to “agree to disagree” over the uninhabited islands, known as the Senkaku in Japan and the Diaoyu in China.

A slowing Chinese economy and a sharp drop in Japanese investment are key factors prompting Beijing to rethink its relations with Tokyo, experts said. Japanese firms’ investment in China fell 40 percent on an annual basis in the first half of 2014 after sliding by nearly one-fifth last year.

Reduced tensions would also benefit Japanese companies doing business in China and a meeting with Xi would be a feather in Abe’s diplomatic cap. Since taking office he has been unable to meet Chinese or South Korean leaders.

But persistent disputes over the legacy of Japan’s 1910-1945 colonization of the Korean peninsula have cast doubts on the likelihood of such a meeting. Reuters