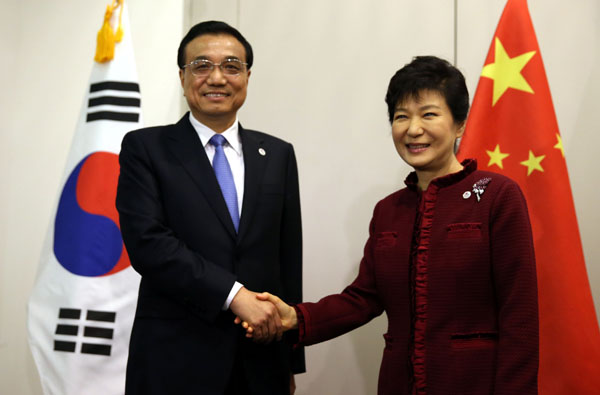 Chinese Premier Li Keqiang expressed his support for improving relations between the two Koreas at a meeting yesterday with President Park Geun-hye.

The meeting was held on the sidelines of the 10th Asia-Europe Meeting (ASEM), which lasted from Thursday to Friday in Milan, Italy.

The two leaders exchanged views on the Korean Peninsula’s denuclearization and recent inter-Korean issues such as planning for high-level talks. Seoul sent a proposal two weeks ago to Pyongyang about holding discussions on Oct. 30.

“Interaction between the two Koreas is crucial,” Li said. “And I support the process of peaceful unification and security on the Korean Peninsula. China will play a constructive role in achieving this.”

Li added that China will retain a firm stance against the North’s development of nuclear weapons.

China has a critical influence on North Korea, and as the second-highest Chinese government official, Li’s statement has provoked national curiosity regarding whether or not it will influence North Korea’s response to the proposal for a high-level meeting.

The North has not yet responded to the South’s suggestion.

Park and Li also talked about the Korea-China FTA and agreed to make an effort to conclude negotiations by the end of this year. The two nations began formal FTA talks in May 2012.

Regarding the FTA, Korea and China have taken different stances over certain delicate issues. Korea has been most sensitive about its agricultural products, while China tries to protect its petrochemicals and heavy industry products.

Before the meeting, Park attended the 10th ASEM meeting where she delivered a keynote speech to rally global support for her “Eurasia initiative.” Her vision aims to bind Asia and Europe as one economic community to influence North Korea into opening up.

During her trip to Italy, Park also was scheduled to meet with Pope Francis, who visited Korea twomonths ago.