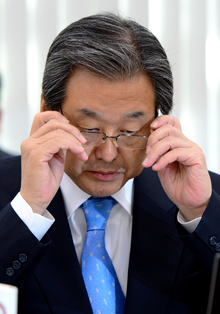 Kim Moo-sung, chairman of the Saenuri Party, speaks at a parliamentary audit into National Federation of Fisheries Cooperatives by the Agriculture, Food, Rural Affairs, Oceans, and Fisheries Committee in Seoul. [NEWS1]

Saenuri Party Chairman Kim Moo-sung apologized to President Park Geun-hye yesterday for stirring up a commotion at home while she was traveling abroad over the need to discuss amending the constitution.

Park, who is in Italy attending the Asia-Europe Meeting (ASEM), is against amendments, stating in January that such a process could “trigger another black hole in the economy.”

“It was a mistake” Kim said during a party meeting yesterday morning. “The president is currently devoting herself to the ASEM meeting and I was being disrespectful. I offer my apologies.”

The Blue House made no public statement about Kim’s remarks.

Kim said on Thursday during a morning meeting with the Korean press in Shanghai, the final stop on his four-day trip to China, that discussion about a constitutional amendment will “explode” and it “can’t possibly be blocked.”

A constitutional amendment has emerged as one of most attention-grabbing issues in parliament in recent weeks. About 150 lawmakers want to revise the presidential system to a semi-presidential system based on the one in France. Under that model, the president is elected by universal suffrage and endowed with considerable powers, while the prime minister heads a cabinet subject to assembly votes of confidence.

In Shanghai, Kim cited the Austrian system as an exemplary model. Austria has a federal chancellor and a federal president; the former is considered the head of government, while the latter is the head of state.

In Korean politics, the president is both head of government and head of state. The government is divided into three branches: executive, judicial, and legislative.

In regard to his previous comment, Kim stressed yesterday that his intentions were falsely reported by local media, but blamed himself for having ignited the misunderstanding.

“I clearly said we 〔policy makers〕 shouldn’t talk about the amendment until after the regular National Assembly session,” he said. “I said it with a worried tone that when the session does end, there might be an outpouring of discussions.”

He said it was his “mistake” to have talked about such a “sensitive matter.”

Kim stressed he has no intention to engage in a “head-on collision” with the president.

“The president was right about how the amendment will trigger a black hole in the economy,” he said.

In response to the Kim’s contrition, Woo Yoon-keun, floor leader of the main opposition New Politics Alliance for Democracy, said yesterday it proved that “Korea has an imperial president” and that such a political structure should be fixed, hinting that a constitutional amendment is inevitable.

As of Oct. 2, the so-called “Meeting of Lawmakers Pushing the Amendment of the Constitution” had 152 lawmakers as members.

If 48 more join, it would have two thirds of the National Assembly’s 300 seats, enough to pass a constitutional amendment.

Their chief focus is to reduce the president’s term from five years to four, and allow reelection to a second term.

Kim is not affiliated with the group, but has previously mentioned that the current five-year, single-term presidency in Korea is an “all-or-nothing game” and “nothing works at the Assembly because lawmakers are stuck in a fight over political ideology.”