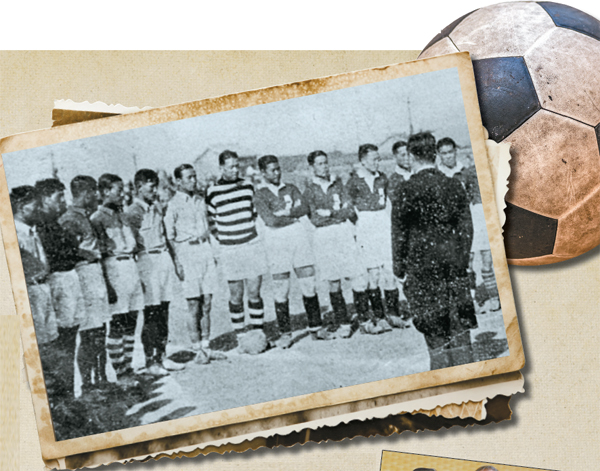 A football match between Seoul and Pyongyang in 1935; Members of the compilation committee for the inter-Korean dictionary. [JoongAng Ilbo]

The first-ever football tournament between Gyeongseong, as Seoul was called back then, and Pyongyang, the two main cities on the Korean Peninsula, was scheduled for Oct. 8, 1929, at Whimoon High School in Seoul.

The contest brought in the who’s who of one of the most popular sports of the era. In the 1920s - when Korea was under Japanese colonization - football became very popular in Korea, mostly among students in Seoul and Pyongyang.

The venue was overcrowded with fans who had flocked to see high-profile sports figures like Yeo Yoon-hyeong, Hyeon Jeong-ju and Lee Yeong-min. 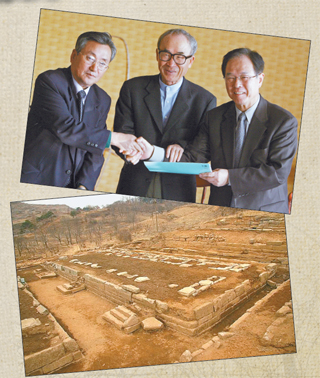 Moon Yeong-ho, poet Ko Un and Hong Yun-pyo (from left) meet in 2005; and the Manwoldae site, where a joint excavation between the Koreas is taking place. [JoongAng Ilbo]

Three rounds took place. The first game was a neck-and-neck match that ended in a tie, but Pyongyang managed to win the second and third matches.

A sporting tradition is launched

This was the start of the legendary Gyeong-Pyong Soccer Tournament.

Football fans were disappointed when the competition did not take place in 1931 and 1932 due to internal issues of the organizers, but it was revived in 1933.

“From this year, the joyous regular match will take place,” a Dong-a Ilbo article on Oct. 8, 1933, reported, under the headline “Big festivities in the area of football, Gyeong-Pyong.”

But the tournament stopped running in 1935 amid Japanese pressure and issues such as controversial referee calls and fights between cheer squads. In 1946, a year after Korea was liberated from Japan, the beloved tournament was revived. But amid political chaos and the ensuing division of the country after the 1950-53 Korean War, it was never repeated.

Yonhap News recently reported that Seoul City Mayor Park Won-soon is working to bring the tournament back next year to mark the 70th anniversary of Korea’s liberation from Japanese colonial rule.

The report said the Seoul Metropolitan Government is in talks to revive the games with officials from the Korea Football Association, the Korean Olympic Committee and the Seoul Sports Council, among others. It added that it is deliberating whether it should be a game of professionals, amateurs or even teenagers.

In an Oct. 7 press conference, Park suggested he had an intention to restore the sporting tradition.

“I believe there is a higher chance that Seoul can play its part, realizing projects like the Gyeong-Pyong Soccer Tournament and a joint concert with the Seoul Philharmonic Orchestra.”

As this isn’t the first time Park has discussed his wish to revive the tournament, some media have dubbed the project Park’s “long-cherished wish.”

But Park is hardly the first Seoul city mayor to envision the Gyeong-Pyong Soccer Tournament’s comeback. In the late 1990s, former Seoul City Mayor Goh Kun suggested the possibility, although to no avail.

It took an inter-Korean match between female football teams on Sept. 29 at the Asian Games and the men’s football teams on Oct. 2, however, to remind people that culture and sports events can bring people of different ideologies together. Calls for a Gyeong-Pyong Soccer Tournament were renewed as a result.

Won Yoo-chul, a ruling Saenuri Party lawmaker, said on Oct. 8 that the conservative party had rooted for the North Korean female players at the inter-Korean match on Sept. 29, adding, “it would be nice to revive the Gyeong-Pyong Soccer Match and hold the games in Seoul and Pyongyang in turn.”

There have been close to no inter-Korean cultural exchanges since the North’s sinking of the South’s Cheonan warship near the Yellow Sea border in March 2010. Yet there have been increasing calls to engender cultural ties regardless of political tensions between the two Koreas, particularly because next year is special for both the South and North.

President Park Geun-hye, in her Aug. 15 liberation day speech, said that inter-Korean cooperation in the culture area could pave the way for reconciliation.

“It would mean a lot if the two Koreas plan a cultural project that can commemorate the 70th anniversary of independence,” Park said, especially citing joint archaeological explorations of cultural heritage.

But can inter-Korean cultural exchanges really be free from politics?

The archeological project was set to begin on July 3, 2006, during the Roh Moo-hyun administration, which sought friendly relations with the North. But on June 30, North Korean archaeologists sent a fax saying that the project had to be postponed. In October 2006, the North conducted a nuclear test souring inter-Korean relations, and it wasn’t until May 2007 that the excavation begun.

The dig was then halted in 2010 due to the Cheonan incident. It briefly resumed in 2011, but with the sudden death of former North Korean leader Kim Jong-il, archaeologists from the Communist nation retreated from the work.

The excavation didn’t take place in 2012 and 2013 but resumed this year, although sources say the Seoul government didn’t want to make a big deal out of it. One Cultural Heritage Administration insider told the Korea JoongAng Daily in September that “the government seems to want to keep low-profile of the latest excavation [due to current inter-Korean relations].”

The situation does not differ all that much with a project to create a joint dictionary for South and North Korea. The project was first inked in 2004 and in January 2006 a compilation committee was launched. However, regular meetings have been stalled since December 2009.

The meetings resumed in July this year.

At a recent parliamentary audit, lawmakers criticized the Ministry of Culture for not allocating a budget for inter-Korean cultural exchanges for next year.

“Political negotiations with the North are difficult,” said Park Chang-sik, a lawmaker with the ruling Saenuri Party, “but cultural exchanges could pave the way to convince the North to abandon its missiles and nuclear ambitions.”