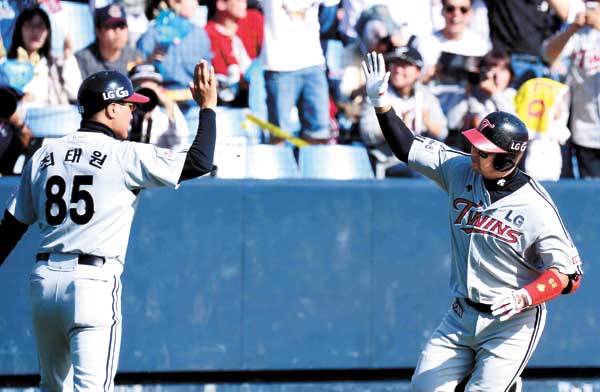 The LG Twins scored six runs in the first inning and never looked back as they hammered the NC Dinos, 13-4, yesterday in the first game of the 2014 Korea Baseball Organization postseason.

The winner of the best-of-five opening series will advance to the second round to play the Nexen Heroes for the right to face the Samsung Lions in the best-of-seven Korean Series.

After their disastrous start, the Dinos got a run back on Na Sung-bum’s solo home run in the second inning, but the Twins added to their lead by scoring once in the third and fifth.

The atmosphere suddenly changed as LG starter Ryu Je-guk was ejected after his 135-kilometer-per-hour (83.9-mile-per-hour) fastball grazed the helmet of batter Mo Chang-min.

The Twins nailed down the victory with five more runs in the seventh.

NC scored two more in the eighth and ninth, but it was too little, too late. The two teams play again tonight.

This year, the Daegu-based Lions are looking to win their fourth consecutive Korean Series title.

Standing in their way will be the Heroes, who finished the regular season in second place and have four of five MVP nominees.

Park Byung-ho led the league in home runs (52, the third most in KBO history) and RBIs (124) for the third straight year. Park’s teammate Kang Jung-ho hit his 40th homer in the last game of the
season.

Nexen’s Seo Geon-chang became the first KBO player to have 200 hits in a season, finishing with 201, and led the league in hitting with a .370 average. Pitcher Andy Van Hekken was the league’s
only 20-game winner.

During the regular season, Nexen was 7-8-1 against Samsung.

The third-place Dinos (5-10-1 against Samsung) made it to the postseason in only their second year of existence on the strength of their starting rotation. In a game against Samsung on Tuesday, NC
sent out Eric Hacker, Thad Weber and Lee Jae-hak to prepare for the postseason, and they held the Lions scoreless until the seventh.

The LG Twins are playing in the postseason for the second straight year after an absence of 11 years. The team was 7-9 versus Samsung during the season. In May, the Twins ended Samsung’s streak of winning 144 consecutive games when it had the lead after the seventh inning.