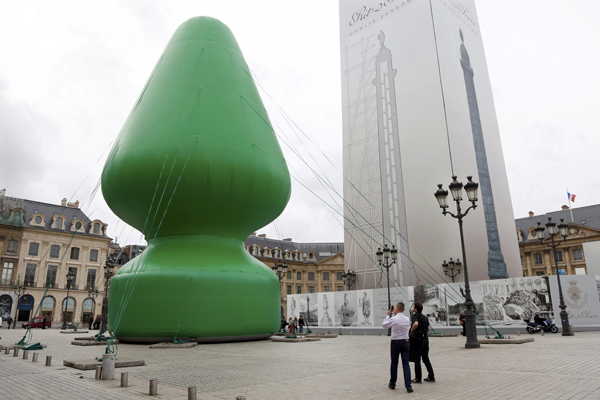 U.S. artist Paul McCarthy’s “Tree” creation is displayed on the Place Vendome in this picture taken Oct. 16 in Paris. Vandals attacked the giant green inflatable in the early hours of Saturday after its resemblance to a sex toy sparked an outcry. [REUTERS/NEWS1]


PARIS - A controversial green art installation on Paris’s Place Vendome Tony has been taken down after being vandalized overnight.

The 24-meter-high (78-foot) canvas artwork by the U.S. artist was unveiled on Thursday in Place Vendome, famous for its luxury jewelry stores and the Ritz Hotel.

“An unidentified group of people cut the cables which were holding the artwork, which caused it to collapse,” police told Reuters.

“The person responsible for the piece then decided to deflate it to avoid it being more seriously damaged.”

The sculpture was deflated and folded up on Saturday.

McCarthy told French newspaper Le Monde that his work “Tree” was inspired both by a sex toy called a butt plug and a Christmas tree. It was part of the International Contemporary Art Fair (FIAC) taking place in Paris from Oct. 23 through 26.

Paris Mayor Anne Hidalgo said the attack was unacceptable and also denounced an assault on McCarthy the day he installed the work, when a man hit him in the face before running away.

“Paris will not succumb to the threats of those who, by attacking an artist or a work, are attacking artistic freedom,” she said in a statement. “Art has its place in our streets and nobody will be able to chase it away.”

Culture Minister Fleur Pellerin blasted the vandalism, calling it “a serious attack on the principle of artistic freedom.’’