Maestro to conduct ‘Otello’ in Seoul

Maestro to conduct ‘Otello’ in Seoul

Verdi’s “Otello,” based on Shakespeare’s tragic play “Othello,” will be performed by the Korea National Opera next month at Seoul Arts Center. Provided by the organizer


British maestro Graeme Jenkins, 56, has conducted operas all over the world, spanning from baroque to German masterpieces, but this is his first time in Korea. To celebrate the 450th anniversary of Shakespeare’s birth, the National Opera has invited Jenkins to twirl his baton at its upcoming opera, “Otello.”

Jenkins has been rehearsing with the Korean production team to stage one of Verdi’s masterpieces at the Seoul Arts Center from Nov. 6 to 9.

The conductor praised the center’s Opera Theater, where “Otello” will be held, saying the venue will have great acoustics as it resembles Shakespeare’s Globe in London.

“So the chorus can be sometimes a part of the drama or otherwise spectators looking on what goes on,” said Jenkins. “I’m fascinated by the whole state of the arts in Korea.” 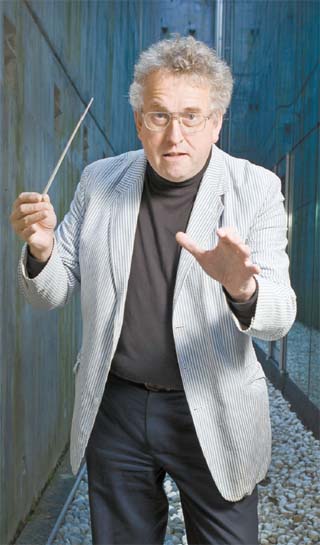 “Two years ago, I conducted a very grand German competition called ARD [Music] Competition. In the finals for singers, there was just one German and the rest were all Koreans, and they were all marvelous,” said Jenkins. “What really interests me is, with great respect, what’s been always hard working with Koreans is they always have the voice but the face is rather inexpressive. But now, I see that they’ve learned how to use the face and even act. This is such a big leap.”

Verdi’s “Otello,” which the composer set to an Italian libretto by Arrigo Boito, is based on Shakespeare’s tragedy “Othello.” According to Jenkins, it is an exotic piece. For the audience to fully enjoy and to better understand the music, he suggests “perhaps to read the synopsis” before coming to see the show.

Jenkins took Tchaikovsky as an example.

“When you hear Tchaikovsky next time, you need to know that this is him saying, ‘I’m sorry, I’ve been married but I’m not a heterosexual man. I’m gay,’” said Jenkins. “You need to know the knowledge behind the notes. So many people just go and listen to the music, but that’s only the starting point?...?Many say opera is too long and boring, but if you do some research and if you know why the composer wrote these notes and what’s behind it, then the audiences will have endless fascination.”

To hear more about the upcoming show, the Korea JoongAng Daily sat down with Jenkins at the Seoul Arts Center last week.

Q. From a musical aspect, what’s so special about “Otello”?

A. It goes very fast. Unlike “La Traviata,” there aren’t so many arias. Because the action is always forward, it’s more like a play with music. There are very few times in the opera where you get a big singing aria. Especially at the end of Act 2 where Iago, Otello’s ensign, and Otello kneel down together and they swear an oath, saying “Si, pel ciel,” which means “Yes, by heaven.” That’s tremendous. It lasts only three minutes, but what a duet. The way in which Verdi uses the orchestra is also not to miss. All the time, you can hear the undercurrent of nervousness, of the jealousy.

I’ll give you one key to Act 4. If you could listen to “Tristan” by Wagner, you could hear the cor anglais, which is the English horn or the deep oboe. I think Verdi had studied a lot of “Tristan” when he wrote this piece because in the saddest moments of Act 4, he uses the cor anglais. In this famous song, the “Willow Song,” you can hear the phrase by the cor anglais. It brings such sadness to the music. It’s like the players are crying.

Is it also a difficult piece for the orchestra to play?

It’s hard. This opera is three hours long and there are a lot of notes to play. In a symphony, when you start the movement going, it’s more or less the same tempo all the way through. But here, nearly every other bar goes at a different tempo. If I’m really doing my job, a character needs a moment of decision. Before Iago disappears at the start of Act 3, he says to Otello to watch out for the handkerchief. And suddenly Otello explodes like a wild beast and says, “Va! Volentieri,” which is yelling out “get away.” I have to time the moment where “Va!” starts. I have to watch the singer. I can’t just start the orchestra on my own. It’s got to be that moment where the poison twists in Otello. So I have to be very flexible, and of course the orchestra has to be focused on me at all times and has got to learn to be flexible as well.

There’s a double cast for the lead role Otello. Is this a common system for other opera productions?

It’s very rare, but I think we do this in Korea because we have four performances in a row. Nobody could sing four performances in a row in one go. In London, you would have it spread out for having just one cast for the leading role. You will do one performance and there will be three days off, then there will be the next performance. I am actually nervous for myself because normally, when I do “Otello,” I like one or two days off because it’s so physically tiring. The performance goes on for three hours. It’s not long, but it’s the emotion and the drive. At the end of the performance, I’m completely shattered.

You are known for the breadth of your opera repertoire. Were you always interested in opera?

My career has been more opera-based. Much as though I enjoy conducting a Tchaikovsky symphony or Beethoven, ultimately a really great evening of opera, I think, is unsurpassable. Because it’s not just the music, it’s the effect of the lighting, the costumes, the designs and the whole drama. It definitely has a greater effect. A really great evening of “Otello,” or great operas of Wagner or Mozart, is just enormous. I’ve been very lucky to go all over the world doing this.