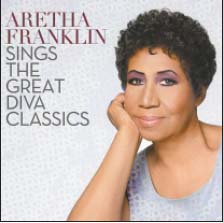 Aretha Franklin sings the sound of America like nobody else alive - a point of unceasing pride for Detroit, the place she was raised and remains near today. So the release of “Aretha Franklin Sings the Great Diva Classics” raises one question right off: Does the singular Queen of Soul really need to borrow from other divas?

The answer is she doesn’t need to do anything, but a dive into the realm of other divas is a solid move.

Taking on standards is a common, often lucrative, move for career artists of a certain age and older. But it can be risky, revealing unfavorable comparisons and weaknesses brought on by the march of time. Yet in her uniquely Aretha way, she emerges largely ready for the challenge and more often than not scores commercial and artistic points.

Aretha’s latest clicks by spanning genres and generations. And even if it wasn’t her intention, it’s hard not to see the album as part compliment, part competition. “Divas” proves Franklin’s still got it, and it shows that we’ve still got her.