After a five-year hiatus from the music scene, singer Seo Tai-ji gave a concert on Saturday, celebrating the release of his new album. Provided by Seotaiji Company

Silence filled Jamsil Olympic Stadium on Saturday evening as singer Seo Tai-ji took to the stage for the first time in five years.

“I missed you,” the 42-year-old told some 20,000 fans who had ardently waited for the return of their favorite star. With tears brimming in his eyes, he began the comeback concert in celebration of the release of his ninth album, “Quiet Night,” which was unveiled to the public yesterday.

Because it was just a day after a grate collapsed, killing 16 people during a K-pop concert in Seongnam, Gyeonggi, more than 300 security agents were in place inside the stadium.

Seo has stayed out of the public eye for the past five years, but he made headlines when his secret marriage and divorce was revealed by the media. The singer was called the “President of Culture” back in the ’90s, but he is considered more as a scandalous figure by many young people today.

As a result, the comeback concert meant a lot to the singer and his long-time fans. It was Seo’s first test for the relaunch of his music career.

The concert’s scale was overwhelming. In line with the new album’s lead-off track “Christmalo.win,” a composite word made up of “Christmas” and “Halloween,” the concert hall oozed with a sacred yet grotesque ambience because of the many decorations and installations in place.

A giant pumpkin-shaped figure obscured the ceiling. The walls were covered with eerie-looking bone structures while a sleigh hung over the heads of concertgoers.

The show’s sound quality was also taken to the next level. Heart-pounding beats and pulsating rhythms by world-renowned sound designer Paul Bauman were effective enough to pump up the 50,000-seat stadium. The late autumn chill wasn’t able to stop fervent fans from roaring out the singer’s name. 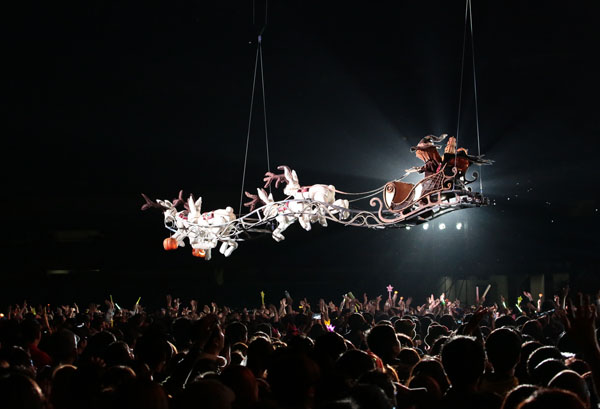 Six tracks from Seo’s new album were unveiled during the concert, most of which took an experimental approach, merging various genres from electronic to acoustic and rock.

At one point, the singer’s voice became unstable and was engulfed by loud background sounds, which distracted the concert’s flow. As Seo is not an extremely strong vocalist, it could have been better if a smaller venue was selected for the show.

Near the end, the legend gave out a short speech that summed up his turbulent career, which has spanned more than 20 years.

“There are many stars from the ’90s that you adore,” said Seo. “I think we are aging together.”

Calling himself an “over-the-hill singer,” Seo started to perform his new song “Nineties Icon,” which contains lyrics where Seo ponders his identity as a vocalist.

When the track finished, fans could feel how much pressure it had been for Seo to live life as a legend while feeling that he was just an ordinary man.

The singer has alienated himself from the public for too long, but his latest concert implied it will be different from now on. Seo Tai-ji is ready to meet the world again.