Ronaldo off to the fastest-ever La Liga start

Ronaldo off to the fastest-ever La Liga start 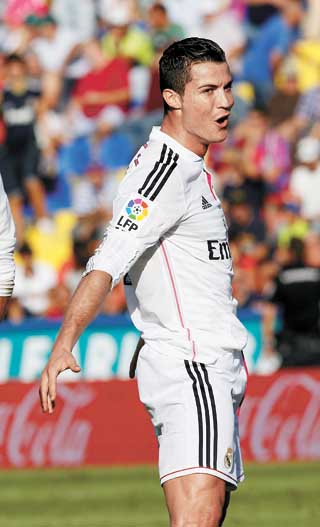 Real Madrid’s Cristiano Ronaldo celebrates his second goal of the day against Levante during a La Liga match Saturday in Valencia, Spain. [AP/NEWSIS]

Cristiano Ronaldo netted his 14th and 15th g1oals to set a record scoring start in a Spanish league season as Real Madrid eased to a 5-0 win at Levante on Saturday, while Lionel Messi also scored to move within one of the league’s all-time scorer.

Messi guided league leader Barcelona to a 3-0 win at home over promoted Eibar, setting up Xavi Hernandez to break through in the second half and scoring after Neymar had doubled the lead.

Messi is poised to equal Telmo Zarra’s milestone of 251 goals that has stood since 1955 next week at rival Madrid’s Santiago Bernabeu Stadium.

Barcelona goalkeeper Claudio Bravo also extended his record of not conceding a goal to eight matches as the Catalan club maintained its four-point advantage over Madrid at the top of the standings.

“We will go out to win at the Bernabeu as we have always done, especially in recent years,’’ said Barcelona Coach Luis Enrique.

Valencia and Sevilla can pass second-place Madrid on Sunday.

While Messi closed on Zarra, Ronaldo made sure to make his own mark by breaking a record that had stood since the 1943-44 season, when Oviedo’s Esteban Echevarria scored 14 goals through the first eight matches.

The Ballon d’Or holder opened from the penalty spot in the 13th minute before adding another goal in the 61st, increasing his league-leading tally to 15 goals in eight matches, despite missing one game due to injury.

“It is impossible to do more than what [Ronaldo] does,’’ said Madrid Coach Carlo Ancelotti. “There are no goals without sacrifice, a fighting spirit and concentration.’’

Ancelotti said that Gareth Bale didn’t play because of pain in his gluteus. The manager rested him as a precaution with Madrid visiting Liverpool in the Champions League on Wednesday before the first “clasico’’ match of the season three days later.

Elsewhere, Manuel “Nolito’’ Agudo continued his strong campaign by scoring in the 73rd to give Celta Vigo a 1-1 draw at Athletic Bilbao, keeping the Basque club with one win in 10 matches in all competitions not counting its elimination of Napoli from the Champions League playoffs.

Malaga settled for a 2-1 win at Cordoba that could have been bigger on first-half goals by Samuel Garcia and Nordin Amrabat before Nabil Ghilas pulled on back in injury time. Malaga stayed in the upper half of the table while Cordoba remained the only winless side in the 20-team top division.

Ronaldo has scored 19 goals in all competitions and found the net in 10 of his 12 appearances overall for Madrid. He also grabbed a stoppage-time winner for Portugal in a 1-0 victory over Denmark in a European Championship qualifier on Tuesday.

Hernandez had a part in Ronaldo’s first goal when he took a pass in the area and was fouled from behind by Juanfran Garcia. Ronaldo stepped up and drove in the spot kick.

Hernandez played well in place of the ill Karim Benzema and scored in the 38th when he headed Rodriguez’s cross in off the grass.

Ronaldo made it 3-0 with an electrifying slalom to dribble past two defenders and cap a counterattack started by Isco.

Rodriguez scored five minutes later after deftly controlling Toni Kroos’ lobbed pass with his chest, and Isco finished off the demoralized Levante in the 82nd.

Madrid’s Luka Modric was substituted in the 79th for a possible leg injury, giving Alvaro Medran his debut.

Eibar was not intimidated by its first match at Camp Nou, choosing its moments well to go forward and almost surprised Barcelona twice in an evenly-matched first half.

Forward Ander Capa misfired on an open goal from an angle in the 41st after he received a long pass and rounded Bravo, and three minutes later Bravo had to rush out to block Saul Berjon’s attempt.

Eibar hung on for an hour until Messi turned playmaker by picking out Xavi’s run and threading a ball through for the captain to score in the 60th.

Neymar calmed the uneasy Camp Nou crowd by volleying in Dani Alves’ cross in the 72nd for his eighth league goal. AP