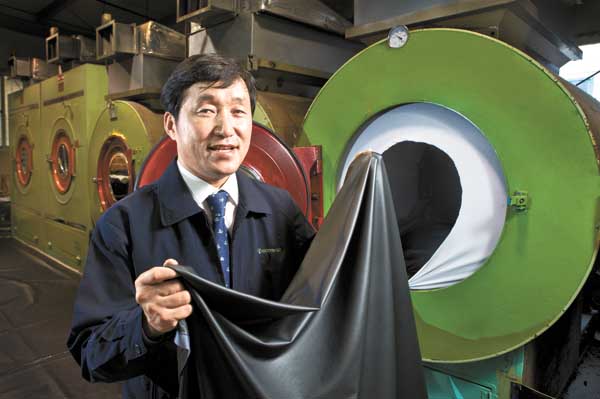 The noise from huge machines producing piles of synthetic leather filled the air inside the midsize factory in Ansan, southern Gyeonggi.

At the facility run by Dong Kwang Chemical Corporation, employees showed off the different kinds of artificial leather produced there, from microfiber to nonwoven materials used to make garments, furniture and accessories. 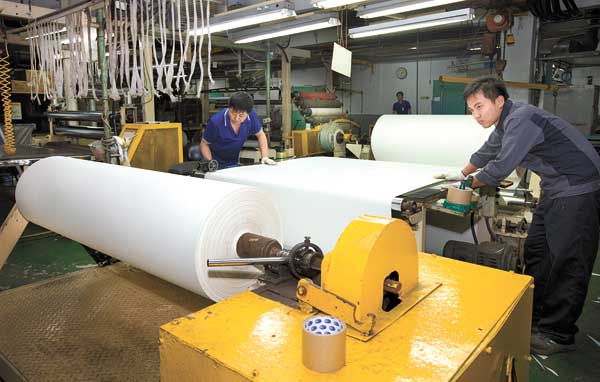 The 60 employees at Dong Kwang Chemical’s Ansan factory produce about 14 million dollars worth of synthetic leather a year. By Park Sang-moon

When the company was established in 1998 as Dong Kwang Trading Company, it supplied finished or semi-finished artificial leather goods exclusively for making clothes and shoes.

But after acquiring Doorim Chemical Products in 2000, the company became Dong Kwang Chemical and established a Chinese unit in Shanghai.

Dong Kwang Chemical has gained major clients because of its nonwoven fabric technology and years of experience as a retailer and manufacturer.

He added that Dong Kwang Chemical’s management worked hard to secure a contract with San Fang and succeeded because of the company’s goal to pursue shared growth with core clients.

The CEO emphasized the importance of building business relationships based on trust.

“We have a stable sales contract with San Fang and other major Chinese synthetic leather producers,” he said. “They are all exclusive, because of mutual trust.”

While working at Dong Kwang, Choi, a chemical engineer, gave weekly technology consultations to San Fang, where he learned about the company’s process for manufacturing synthetic leather.

“They had advanced technology because they were producing their own materials for synthetic leather for shoes, and manufacturing shoes for Nike and Adidas as the original equipment manufacturer [OEM],” he said.

San Fang asked Choi how it could improve its materials, and as the company’s adviser, he suggested it upgrade to Dong Kwang products for its shoes.

“That is when San Fang started using Korea’s nonwoven fabrics and so did other synthetic leather manufacturers in Taiwan and China,” he said. “As San Fang grew, Dong Kwang Chemical also grew as its partner, realizing the shared growth.

“Currently, even though we are not a subsidiary of San Fang, we take 100 percent of its orders to supply materials.”

As it expanded to acquire a total of four affiliates, Dong Kwang also diversified its products to include balls, IT accessories and upholstery for car interiors.

“The market for synthetic leather is growing continuously,” Choi said. “Real leather is high quality, but there are various environmental issues, such as the protection of animals and water pollution.”

The CEO said that the preference for artificial leather has helped Dong Kwang Chemical become the biggest synthetic leather trader in Korea, and many Korean and Chinese chemical companies outsource production to Dong Kwang Chemical.

Choi said that the company can keep innovating and expanding because of its small group of about 60 skilled workers.

“Most of our employees are engineers, and they continue to develop new materials and technology as well as maintain the high quality of products,” he said.

The company makes materials for specific OEM orders at its joint venture factories in China and Taiwan for customers in Southeast Asia and South America.

“When we receive orders from our clients in Taiwan, China and South America, we make orders to our subcontractors to produce the materials for export,” the CEO said.

Currently, to manage OEM orders and production, Dong Kwang Chemical has nine employees and three researchers at its jointly owned plant in Shanghai.

Dong Kwang Chemical’s second factory in Vietnam produces the largest amount of nonwoven fabric for synthetic leather in the world, with $15 million in annual revenue.

The company has grown 26 percent annually for the past five years and is preparing to list on the Kosdaq market by 2017 after merging its production affiliates.

“We have received venture capital, and this year will be our transitory period in shifting our focus from trade to production,” Choi said.

“We have become a leader in terms of trading materials for synthetic leather, but having a small production line has always been our limitation. Accordingly, last year, we incorporated the factory in Vietnam producing nonwoven fabric and Doorim Tec, the production plant in Ansan for thin, high-value synthetic leather.”

“Our goal for next year will be to establish strategies to further cut the cost of production and improve productivity. Also we have a target of expanding production to a value of $30 million from the current $13 million by continuing to expand outsourcing from Chinese companies and producing nonwoven fabrics in Vietnam.

“I believe it is possible because we have a network in China and get a large volume of orders from them. ... That way, our shares on the stock market will be stable when we list.”

Choi said that because Dong Kwang has so many affiliates abroad, he has found that it’s important to trust each business partner with their roles and responsibilities.

“Dong Kwang Chemical has a corporate culture of trust and unity based on responsible management at each affiliate,” said Choi. “The affiliates fulfill their management roles organically, based on a longtime relationship of trust between key management staff.”