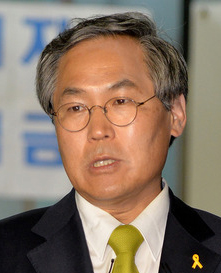 
Rep. Woo Yoon-keun, who was elected floor leader of the troubled New Politics Alliance for Democracy (NPAD) last week, has plenty on his plate. But in an interview with the JoongAng Ilbo on Tuesday he said “communication and the forming of a special committee devoted to constitutional amendment” are his top priorities.

“I want to build a healthy discussion culture,” Woo said at the beginning of the interview.

The former lawyer and third-term lawmaker who accepted the baton from Rep. Park Young-sun last Thursday and will hold the position through May, seemed to have the divisions within his party in mind.

At the same time, he appeared determined to drive away the widespread perception that he isn’t tough enough for the job.

“I am not a pure pacifist,” he repeated several times throughout the interview. He stressed that his floor leader position will force him to take on some tough fights.

But he also pledged he won’t swear or ask for the impossible.

His otherwise calm tone rose when the topic of the conversation shifted to the debate in the political sphere about constitutional amendments.

Q. You promised to create an opposition party that is “rational and dignified” upon being elected.

A. You can’t resort to bombarding people with rough words just because you are an opposition lawmaker. The opposition had this feeling of ethical superiority under the military dictatorship. But power is created through elections now. Lawmakers should have some class and show a sense of stability.

Your party suffered severe inner turmoil when negotiations were under way over the special bill for investigating the truth behind the Sewol tragedy.

Do you agree with the media’s assessment of you that you tend to take the middle course without choosing a specific faction, even though you belong to former President Roh Moo-hyun’s group in a broad sense?

I have never been loyal to any individual or faction. I have my own philosophy. But I have my own opinion when it comes to a constitutional amendment.

President Park Geun-hye opposes an amendment. Is it possible?

One of the reasons I ran for floor leader is to publicize the fact that the political strife we currently suffer from stems from our power structure. Has anything gotten better even after we have been replacing almost half of the parliamentary seats in every general election? It [the prospects for the current system] is bleak.

What do you think of the fact that hardliners who have a louder voice tend to determine the party platform during a general meeting.

I don’t think hardliners are necessarily bad. Rather, the ruling party and opposition’s relationship is structurally wrong. The predecessor of the Saenuri Party was really tough and strong in the 17th National Assembly [between May 2004 and May 2008, when it was in opposition]. It found fault with every single detail.

What would you do if a general meeting of your party refuses to accept what was already agreed upon by the ruling and opposition parties, which is exactly what happened under Rep. Park Young-sun in negotiations over the Sewol bill?

I would follow what the lawmakers say. If they refuse to accept an agreement, it means they want me [floor leader] to negotiate again. I am not omnipotent and it is natural to follow the result of what’s discussed at the general meeting.

There is a rumor that some NPAD lawmakers are bracing to establish a new party rooted in the Jeolla region. Your constituency is in Gwangyang, South Jeolla.

It’s true that people in Jeolla aren’t really favorable to our party. But we have never achieved success after dividing ourselves. We should unite forces.