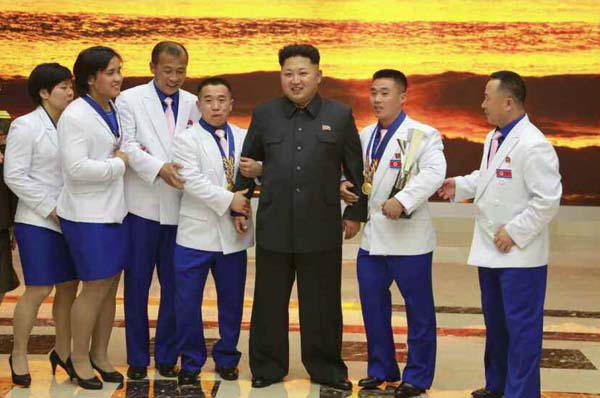 The state-run news agency, however, did not disclose the date Kim visited there.

This is Kim’s first military-related endeavor following a 40-day absence from the public eye. After he missed one of the country’s most important political anniversaries, rumors spread quickly about his health and his ability to control the reclusive nuclear-armed regime.

He resumed public activity last week, although he was using a cane to support his leg. He toured a housing complex for scientists on Tuesday and an apartment complex for teachers on Friday.

Before his recent seclusion, attending military-related events was a routine part of the dictator’s schedule. His last recorded military-related appearance before his seclusion was on Aug. 30, at a meeting with soldiers from an airborne unit.

The unit 1017 is an elite Air Force troop that reportedly operates MiG-29 fighter jets - one of the most advanced combat aircraft among the North’s aging fleet. Kim previously visited the unit in January and August 2013.

This was the first time the North Korean media reported on the 458 unit.

According to the report, top military and party officials, including Vice Marshal Hwang Pyong-so, the director of the General Political Bureau, and Workers’ Party Secretary Choe Ryong-hae, accompanied Kim.

In a separate dispatch, the Korean Central News Agency also reported that Kim met with North Korean athletes who participated in the recently concluded Incheon Asian Games to praise their performance there and at the World Championships. Ri Sol-ju, the North’s first lady, accompanied her husband.

She also shied away from the media spotlight during Kim’s seclusion.

Later in the day, the Rodong Shinmun, the mouthpiece of the ruling Workers’ Party, released photos of Kim at both public activities. Kim was photographed still using a cane, though when he posed for photos with the athletes, he stood without it.

The state’s Korean Central Television (KCTV) also reported about Kim’s appearances but did not air video footage. Instead, the TV network ran still photographs of the broadly-smiling North Korean leader.