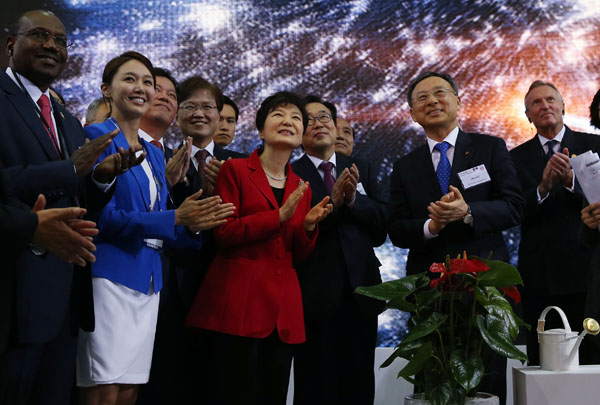 President Park Geun-hye visits the KT booth at the World IT Show in Bexco, Busan, yesterday, which is being held alongside the 2014 ITU conference. KT Chairman Hwang Chang-gyu, second from right, guided her throughout the show.[Joint Press Corps]


The message was clear from Busan: the key to Korea’s economic future is information and communication technologies (ICT).

That’s what was stressed by President Park Geun-hye and other leaders from the private sector attending the 2014 International Telecommunication Union (ITU) Plenipotentiary Conference that officially kicked off yesterday in the southern port city of Busan.

Korea laid out its plans to be the first in commercializing the 5G mobile data network, which will not only speed up data transfers but also increase connectivity - the key to growing the Internet of Things (IoT) market.

At the conference’s opening ceremony, Park said ICT can really be a game-changer in terms of a country’s economic development.

“Back in the 1980s, Korea was at the periphery of telecommunications with only a 7 percent telephone distribution rate nationwide,” said Park. “Then we leaped ahead over the past three decades to rank as the world’s No. 1 in ICT development.

“We are preparing for another leap to shift Korea’s economic development paradigm to a leader model - from a fast-follower model - on the foundation of strong ICT infrastructure,” Park continued. “For instance, the nationwide super-fast Internet network to be constructed by 2017 and the world’s first 5G mobile data network scheduled to be commercialized by 2020 will help Korea lead a hyper-connected society.”

Park also requested that ITU members set up norms and standards that do not leave developing nations behind and prevent any risks that may arise from excessive connectivity via technologies like the Internet of Things (IoT). She said each government’s efforts are crucial.

“As a vast range of parties are closely connected via ICT, a single global standard needs to be set that can mediate possible conflicts of interest,” said Park. “I urge each government to strengthen partnerships between the public and private sectors and to construct open decision-making systems.”

UN Secretary General Ban Ki-moon also sent a congratulatory message via video on the opening of the international event.

“ICTs are, in short, among the keys to achieving sustainable development,” Ban said. “Mobile phones have connected people as never before. Broadband networks have made information accessible, helping to bridge the digital divide, especially for women, youth and people living with disabilities.

“As we shape a new development agenda and strive for a new agreement on climate change, let us continue to work together to harness the power of technology to create an accessible and sustainable future for all.”

ITU Secretary General Hamadoun Toure said there was no other place more equipped to host the event than Korea.

“Korea is a leading country in terms of ICT development,” Toure said.

The United Nation’s ICT agency’s quadrennial conference, often referred to as “the Olympics of ICT,” is one of the biggest global ICT policy discussion events. The Korean minister of science, ICT and future planning, Choi Yang-hee, and government officials from 193 member countries will be discussing and establishing policies.

Aside from the main meeting, attendees from the public and private sectors gathered for a two-day sub-conference on fifth-generation mobile technologies, which are about 1,000 times faster than current 4G LTE data networks. This will enable live, 3-D or holographic video communications.