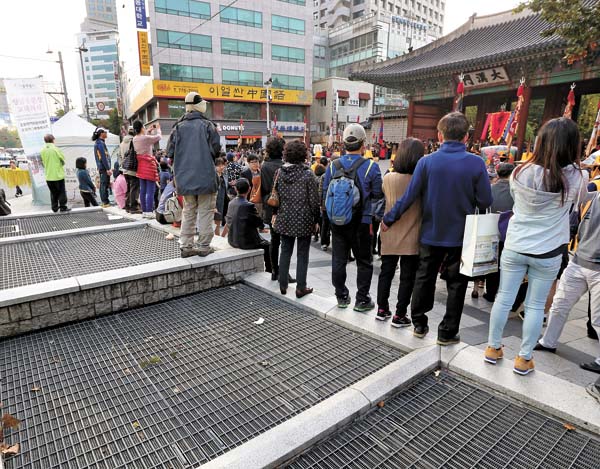 People stand on the side of a ventilation grate as they watch a performance on Saturday in front of the Deoksu Palace in central Seoul. By Choi Jeong-dong

“I feel anxious every time I hear the rattling sound, because so many people walk across this ventilation shaft,” said 62-year-old Park who owns a small snack bar next to a subway ventilation grate by Myeongdong Station, central Seoul.

Park has run his snack bar in the same location for a long time now, but a deadly accident on Friday in Seongnam, Gyeonggi, in which 16 people watching an outdoor concert fell to their deaths after a ventilation grate collapsed, has left him nervous and on alert.

The shaft, which measures 10 by 3 meters (32 by 9 feet), also has a steel grate on top, similar to the one in last week’s incident. The Seoul Metropolitan Government estimates that there are more than 5,200 ventilation shafts just like it scattered around the capital.

When reporters from the JoongAng Ilbo traveled around Seoul, most of the ventilation shafts did not have warning signs or fences to keep people away.

In some areas like Myeong-dong, the steel grate takes up to two-thirds of the five-meter-wide pathway. Hundreds of thousands of people inundate this area daily, and the ventilation shaft is so deep that the floor below is hardly visible. The grate also sits only about five centimeters (about two inches) above ground, and countless passersby pay no notice as they step over it.

Motorbikes weighing about 150 kilograms (330 pounds) - likely owned by merchants from the nearby Namdaemun Market - were also observed parked on steel grates. And even the homeless were using them as beds.

When asked why he was sleeping atop the grate, one homeless man responded, “I can sleep well because warm wind is coming up from the hole.”

The situation wasn’t much different in the Jongno area, either. The neighborhood, just north of Myeong-dong, boasts a number of jewelry shops, cram schools and cafes.

One ventilation grate in front of a jewelry shop was sunk so low that a person could easily stick his or her fingers through the gap between the steel plates. The steel grate was also disconnected from the top of the tunnel and light enough for a person to lift it.

“I used to run across the grates when going to and from cram school,” said a university student surnamed Bang who attends an English school in Jongno. “They should at least place a warning sign here.”

Authorities and subway operators belatedly put up warning signs on a few ventilation grates after the accident, but such immediate measures only appeared to go so far.

A ventilation grate by a subway station in Gwangjin District, eastern Seoul, was affixed with a warning sign that read: “Danger. Don’t climb up.” But it was too small to attract the attention of passersby.

Some signs weren’t even properly placed and looked like debris or refuse. Some people glanced at the signs but still walked across the steel grates.

The regulation by the Ministry of Land, Infrastructure and Transport concerning such structures only stipulates the volume and interval of ventilation and does not include anything about safety or warning signs.

Since the accident, analysts have pointed out the need for stricter safety regulations regarding ventilation shafts as well as for pedestrians to practice caution.

“The lesson of this accident is that the structures these people climbed on should be able to bear more weight - and they should be less accessible,” said Prof. Je Jin-joo, who teaches public safety at the University of Seoul. “But even if we have systems in place that are safe enough, such accidents can happen at any time if we lack the common sense to take care of ourselves first.”