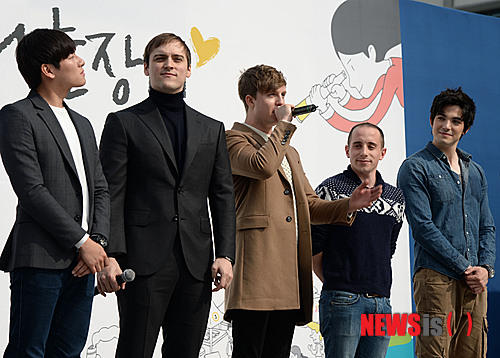 The proceeds from the three markets, about 120 million won ($112,000), will be donated to We Start, a civic organization aimed at helping children obtain proper education and medical care.

Donations were made by a wide spectrum of high-profile figures, including President Park Geun-hye; Seoul Mayor Park Won-soon; National Assembly Chairman Chung Ui-hwa; Seoul’s Roman Catholic Archbishop Andrew Yeom Soo-jung; the world’s No. 2 female pro-golfer Park In-bee; and Hyorin from the girl group Sistar, among others. Those items were sold in a public auction.

The rest, approximately 14,000 items donated by individuals, companies and nonprofit organizations, were sold at a fixed price.

A porcelain bowl donated by President Park went for the highest price. A close aide said she kept it “at arm’s reach,” filling it with candy and other small items.

The lid is in the shape of a lotus, and the bottom of the container boasts Park’s official signature in Korean characters.

“I came all the way here to win this item, and I’m so excited right now,” he said after his bid. “It’s the president’s signature that I thought was the most appealing about this, and I’m going to keep it as a family treasure.”

When asked how he felt about his payment being used for the needy, he answered: “There’s great significance in that fact, too, because I can tell my children the cost of this object went toward helping others.”

Kim Hyung-wook, 40, from Bucheon, Gyeonggi, was sitting on a bench with his son, and had a bag filled with clothes on the ground.

“I’m waiting for my wife to return,” he said, as he wistfully looked around, not knowing exactly where she was. “She bought five pieces of clothing for herself, and dashed away to buy some more.”

In addition to the flea market, WeAJa provided other services and entertainment, including musical performances, free health care consultations, manicure services and crafts, with programs differing by city.

The Korea Association of Cardiopulmonary Resuscitation set up a booth in Seoul’s WeAJa market and provided free CPR education to visitors. Lee Eun-ha, a 38-year-old mother from Gimpo, Gyeonggi, said she found the service quite helpful.

“I brought my son because I wanted him to be prepared for any emergencies in the future,” she said. “The instructors were nice, and their directions were easy enough for my child to understand, so I’m really pleased.”

WeAJa initially launched in 2005 to celebrate the anniversary of the foundation of the JoongAng Media Network, the Korea JoongAng Daily’s mother company.

Over the past decade, WeAJa has collected more than 1.1 billion won, with proceeds going to We Start. Established in 2004, making this year its 10th anniversary, We Start was incubated in part by the JoongAng Ilbo when the media company first shed light on the plight of underprivileged children in a heart-wrenching series of articles.

The news served as an informal call to action, and about 50 private organizations convened to lay the groundwork for the founding of We Start. We Start operates We Start Villages, multipurpose care facilities in areas with more than 200 children in low-come brackets.

The villages provide family counseling, psychological and physical checkups, after-school study programs and nurseries, as well as additional services. So far, they have supported around 67,000 children.