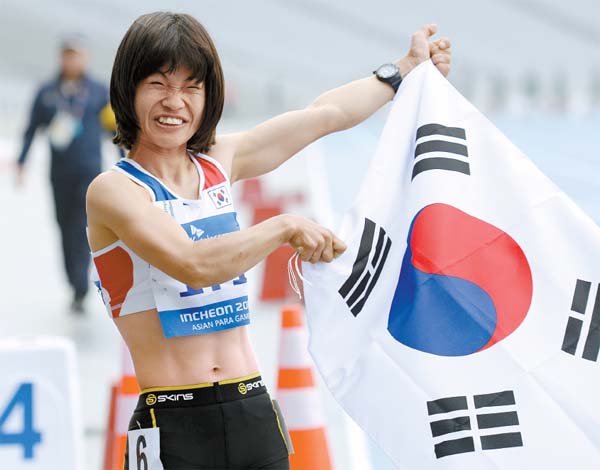 
Jeon Min-jae, the country’s most promising para-athlete, yesterday won her second gold medal in the T36 (cerebral palsy) 100-meter race at the 2014 Incheon Asian Para Games held at the Main Asiad Stadium. She finished in 15.6 seconds, 0.07 second ahead of Yuki Kato of Japan.

By adding to her gold in the T36 200-meter race on Sunday, the 37-year-old Jeon became the first Korean athlete with two gold medals at the event.

In the 200-meter race, Jeon clocked a time of 31.59 seconds, nearly three seconds ahead of Kato, who crossed the finish line in 34.56 seconds.

Though she is not well known among the general public, her gold medals are no surprise.

Since starting her career at age 26, Jeon has been considered Korea’s top para-athlete, retaining national titles in the 100-meter, 200-meter and 400-meter races for nine consecutive years beginning in 2004.

Last year, Jeon finished the three races in first place, but there were not enough competitors in the 400-meter race to make it official, so her medal was withdrawn.

This is not the first time she has won medals in international competition.

Jeon contracted encephalitis when she was 5 years old and the disease gave her cerebral palsy, diminishing her ability to use her arms and speak.

She remembers her childhood as being very gloomy, but her life totally changed when she met her physical education teacher Kim Haeng-su during eighth grade at Dongam Rehabilitation School in Jeonju, North Jeolla, in 2003.

Jeon became a sprinter, and it did not take long for her to win her first gold medal in the national para games.

Since she is not able to speak or use her arms, Jeon wrote a message with her foot after winning her first gold medal on Sunday.

“I want to thank my supportive family and other athletes who worked hard for the Asian Para Games,” it read. “I will become a better athlete, spurred on by all the love and support from them, regardless of results.”

Jeon, who smiles brightly all the time, has a goal: to continue her athletic career until she turns 40 and to retire with a gold at the 2016 Summer Paralympics in Rio de Janeiro.