National ballerinas kept on their toes under Kang

National ballerinas kept on their toes under Kang 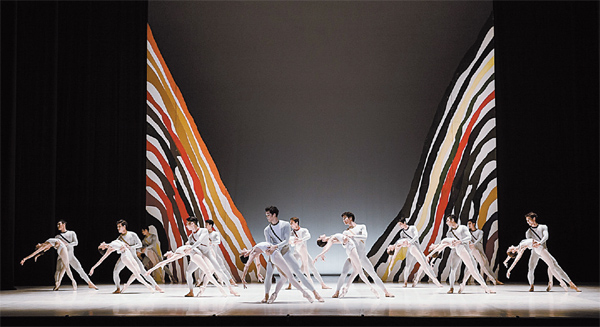 The Korean National Ballet presents a double bill of “The Seventh Symphony” and “The Rite of Spring,” the state-run company’s latest repertoire under its new director Kang Sue-jin. Above is a scene from “The Seventh Symphony,” choreographed by Uwe Scholz. Four performances were staged at the Seoul Arts Center from Oct. 16 to 19. Provided by the Korean National Ballet


Tutus and glittering jewels were conspicuously absent from a recent performance by the Korean National Ballet, unusual for the state-run dance company that tends to present classical ballet pieces.

Yet most fans left the show feeling profoundly gratified with the successful double bill of “The Seventh Symphony” and “The Rite of Spring.”

Expectations were high when the dance company welcomed world-renowned prima ballerina Kang Sue-jin of the Stuttgart Ballet as its new artistic director in February. But while it was clear that Kang would veer from the traditional path taken by her predecessor Choi Tae-ji, who ran the national ballet company for 12 years, presenting these two challenging dances came as a total surprise.

The neoclassical and contemporary pieces require a highly trained group of dancers, as the choreography of both is physically demanding, requiring dancers to use muscles little needed when performing classical compositions. 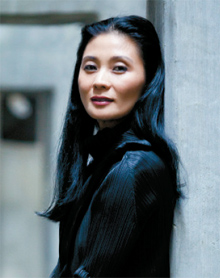 It was apparent from the performance that Kang had really pushed the dancers over the past eight months; on the night of Oct. 16, during the first of four performances, the whole cast seemed highly disciplined.

That was Kang’s goal. During a press conference last December, held prior to her appointment, the prima ballerina said she wanted to make sure “not just one dancer becomes a star but that every member of the company shines on their own.”

The double bill was the first step towards fulfilling her resolution.

“The Seventh Symphony” and “The Rite of Spring” are among the Stuttgart Ballet’s major works and Kang, making full use of her connections, invited the prestigious German company’s former principal Alexander Zaitsev as a guest dancer.

Zaitsev performed as the Chosen One in “The Right of Spring” on Oct. 17 and 18.

In addition, German dancer Uwe Scholz not only choreographed “The Seventh Symphony” using Beethoven’s “Symphony No. 7 in A major,” he also designed the costumes - white leotards with a vivid black line drawn diagonally from the neck for both males and females - and the stage, allowing all three integral parts of the production to harmonize.

The simplicity of the stage and the outfits really allowed the audience to focus on the movements and lines of the dancers, as the choreographer had intended. Scholz had wanted them to appear like “notes on a music score,” he said.

Male dancers appeared on stage wearing very simple flesh-colored leotards for Stravinsky’s “The Rite of Spring.” The choreography was incredibly powerful - with the dancers spinning, jumping and turning at the same time, it almost appeared to be a primitive ritual.

It is not surprising that the piece nearly caused a riot in the audience when it first premiered in Paris in 1913 for the “avant-garde nature of the music and choreography,” according to the Korean National Ballet.

On Oct. 16, Lee Young-cheol performed as the Father for “The Rite of Spring,” alongside Kim Youn-sik, who played the Chosen One, and Shin Hae-jin, who played the Mother.

Perhaps because the choreography requires dancers, especially males, to use muscles not usually needed in classical ballet pieces, Lee seemed to have bulked up even more from two years ago, when his role as Albrecht in “Spartacus” required him to be topless.

Throughout the performance, it was clear that Kang is certainly not a pushover.

Although several dancers looked as if they were not yet fully comfortable jumping and spinning in their tight-fitting leotards, it was satisfying to see that they put in their best efforts for the last eight months under their new director.