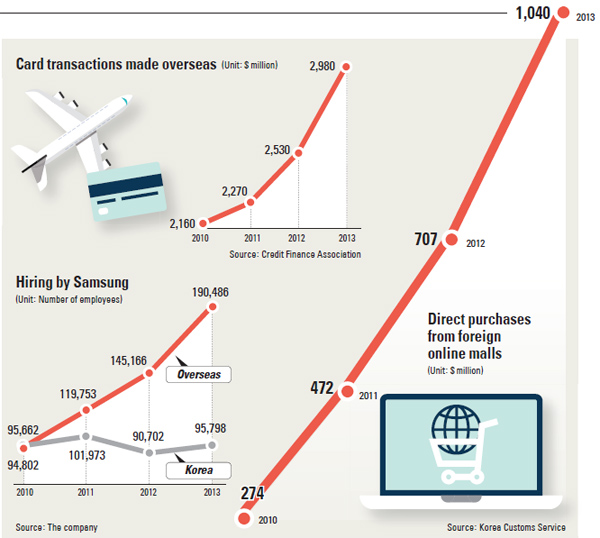 One of things Kim purchases most often is German powdered milk for her children, who are 1 and 2 years old.

“I usually buy 10 cans at a time. Each can is about 5,000 won [$4.90] cheaper than in Korea. Also, it only takes about a week to get here,” said Kim. “Foreign shopping malls also are convenient for payment. Once you register credit card information during your initial purchase, the system accepts payments without checking government-issued self-verification certificates.”

Kim also buys all kinds of other products, including laundry detergent and diapers. Department stores are just showrooms where she tries on clothes before ordering the same items from foreign shopping malls.

Fresh food is the only things she buys at nearby grocery stores.

Kim is one of many local consumers who are buying more products from overseas over the Internet.

Many consumers nowadays even purchase Korean-brand televisions and smartphones from overseas-based online shopping malls. They are still cheaper than in local stores even after adding on tariffs and shipping fees.

According to the Bank of Korea, Koreans spent 6 trillion won from April to June this year, about 2.6 trillion won more than foreigners spent in Korea during the same period.

Koreans’ total spending at home during the second quarter this year increased only 2.6 percent compared to the same period last year, while their spending outside the country rose 6.4 percent.

Analysts warn this trend may be a sign of deflation, as Japan experienced the same shrinkage in domestic spending just before its economy sagged two decades ago.

“Not just spending at home, but Korea’s overall spending has already shrunk to a level where people only spend 60 won of every 100 won they make, mainly due to increasing taxes and insecurity about income after retirement,” said Byun Yang-gyu of Korea Economic Research Institute. “And when people keep shopping overseas, the Korean domestic economy may face a larger risk of a long-term deflation, like in the case of Japan.”

Some hoped that bringing in more foreigners could help close the spending gap in Korea.

At the beginning of this month, waves of Chinese tourists hit the shopping malls during the Chinese National Day holidays. Retailers at large shopping malls in the Dongdaemun area of eastern Seoul saw their sales rise about 50 percent compared to the same period last year.

But after the tourists leave, sales sagged again.

“After Chinese tourists are gone, our sales the past couple of weeks have fallen by at least 30 percent compared to the same period last year,” said a merchant at Dongdaemun. “Not many Korean customers visit our mall. And even if they come, they don’t actually make purchases.”

If these frugal Korean customers decide to spend money, the places they flock to are foreign retail chains and foreign luxury brands.

Foreign cars are expensive, but they accounted for 15 percent of domestic sales in September. In Gangnam, the consumption epicenter of Seoul, about 80 percent of newly registered cars are imported. Audi and Volkswagen combined for more than 2 trillion won in sales in Korea last year.

Korean consumers are closing their pockets for local products, but still spending on luxury imported goods. Or they spend on foreign shopping malls, where the same goods are cheaper.

This trend not only results in an exodus of money, but also jobs. Korean companies end up being unable to invest in creating jobs when domestic sales are low and exports fall. Fundamental solutions lie in filling Koreans’ pockets by creating more jobs.

But this is not so easy, either, as private sector companies move business operations to other countries. During the past decade, Korean companies have invested about $300 billion outside Korea.

At the same time, foreign investment flowing into Korea remained at $127 billion, or about a third of the level Korean companies spend overseas.

“Not just local companies, but foreign companies also should come back to Korea to create more jobs. This is the only way to stop a further exodus of spending by Korean people and companies.”

Analysts also contend that convincing Korean consumers’ to spend their money back at home is another solution, because consumer prices are stable.

Korea’s inflation rate has remained in the 1 percent range for the past three months.