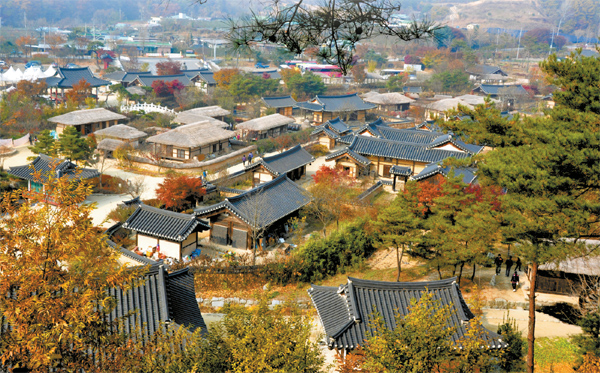 An aerial view of the Scholars’ Village, also known as Seonbichon, in Yeongju, North Gyeongsang. Provided by the Korea Tourism Organization

YEONGJU, North Gyeongsang - To learn about how traditional Korean seonbi, or scholars, attempted to live by Confucian teachings, visit Yeongju.

The city houses Sosu Seowon, the country’s first Confucian academy, which specializes in recreating the everyday lives of historical scholars.

The school has turned the city into a popular travel destination for people who want to discover how Korea developed its Confucian studies and rituals during the Joseon Dynasty (1392-1910).

The academy’s surrounding area is called seonbichon, which translates into scholars’ village. It has been welcoming visitors with its eateries, accommodation and traditional educational programs for about a decade.

The locale, which sees up to 20,000 visitors on weekends, was designated as one of the “Stars of Korea Tourism” by the Korea Tourism Organization in 2012.

Mount Sobaek’s Jarak Trail, which you can trek on by starting out at Seonbichon and Sosu Seowon, has also been honored as a must-visit walking path for tourists to Korea. 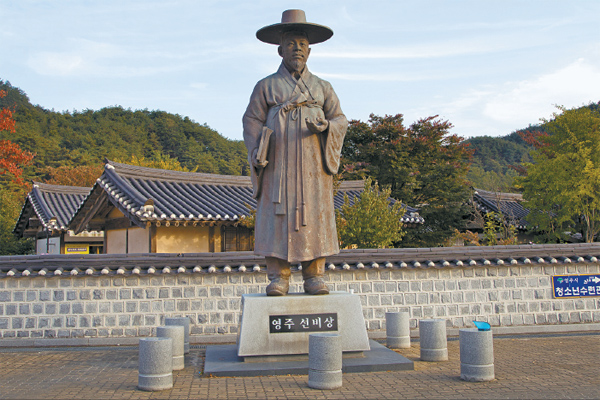 Right in the main parking lot of the Scholars’ Village, a statue of a seonbi, a scholar from the Joseon Dynasty (1392-1910), stands.

I recently traveled to North Gyeongsang to see if I could experience the Confucian spirit that once permeated the village and its surrounding area. While there, I found that fall is the perfect time to visit as Yeongju is known for its apples, which are currently in season.

There are plenty of opportunities to appreciate the natural beauty of the red fruits dangling from the lean yet strong trees along the trail.

Although the Scholars’ Village does not differ much from other traditional villages in terms of aesthetics, it deviates from the norm with its focus on education.

Signs flank the entrances of buildings in the village, but rather than explaining the constructions, they elucidate the core beliefs and values prioritized by Joseon era scholars.

One example of these beliefs is ipsinyangmyeong, which translates to “rising in the world and gaining fame.” A scholar should study hard to become well known in the literary world and have his family name become valuable in the political and social sphere, the sign explains.

Another rule that the scholars tried to follow is susinjega, which means moral training and home management. Susinjega requires a seonbi to train his mind into adhering to cultural ethics and have other family members follow suit so that his entire household will keep to the decorum.

The village offers visitors an opportunity to dress up as traditional scholars while learning about their culture and core beliefs.

Although classes to make wooden stationery or craftworks often used by scholars are available anytime at the site, prior reservations must be made to try on traditional garments and learn extensively about the scholars’ Confucian studies.

Additionally, it is possible to stay overnight in the village, and admission to Sosu Seowon and the Sosu Museum is free for overnight guests.

From left: A narrow bridge over a river in Museom Village, Yeongju; visitors to the Scholars’ Village study the Confucian values while dressed in the daily outfits of Joseon era scholars; and a view of Buseok Temple in Yeongju, which houses Korea’s oldest wooden building, Muryangsujeon.

Sosu Seowon is just a few steps away from the village. The school was first established in 1543 by Ju Se-boong (1495-1554), who became the governing officer of a neighboring town called Punggi. His succeeding officer, Yi Hwang (1501-1570), one of the most well-known Joseon era scholars, asked King Myeongjong (1534-1567) to recognize the study hall. The King bestowed it with the title “Sosu” and personally wrote the name on a wooden plate in front of the building.

Such recognition not only gave the study hall a high level of authority, it also turned it into a center where local aristocrats and the nobility gathered to discuss politics and social issues, along with educating aspiring local scholars.

Although the site is not large, its landscape is marvelous because it is surrounded by tall pine trees, a small stream and a mountain.

To experience the spirit of the scholars in a more natural environment, head to Jarak Trail. Its first route begins directly behind Seonbichon and Sosu Seowon. The track runs through Sobaeksan, a mountain range situated in Yeongju and Danyang, North Chungcheong.

Jarak Trail does not require you to climb the mountain’s peak. Instead, walkers can enjoy a light hike around the lower part of the hills, under tall trees that guarantee constant shade and beautiful greenery.

The first trail is known to have been used often by Joseon era scholars who wished to take the nationwide test in Hanyang, as Seoul was known back then, in order to get a job as a government official.

This is also where the Joseon era’s lower-class children gathered outside the walls of Sosu Seowon to eavesdrop on the readings of their privileged peers.

If you are short on time you can drive up to Choam Temple and start your hike in the mountain. But if you have more than one or two hours to spare, it is advisable to begin walking from Seonbichon and Sosu Seowon.

The trail from Sosu Seowon to Choam Temple is adorned with row upon row of apple farms. Since fall is harvest season, many of the trees are covered with ripe fruit waiting to be picked.

Parking at Choam Temple costs 5,000 won for a small or midsize car.

Visitors to Yeongju might think they have seen enough traditional Korean buildings for one weekend, but stopping in one more area, Museom Village, won’t disappoint.

The town, which is about 30 minutes away from downtown Yeongju, has become known for its very narrow bridge over a shallow river, which only has room for one person to walk on. In fact, it is barely wide enough to place both feet on it.

Aim to arrive at the village around sunset to take some picturesque photos of the bridge, the water and some of the natural background set against the roofs of traditional homes and a pink sky.

If you do not want to drive to Yeongju from Seoul, buses to the city operate from the Express Bus Terminal in Seocho District, southern Seoul, almost every hour, while trains leave Cheongnyangni Station in Dongdaemun District, central Seoul, every hour or two. It will take roughly two and a half hours to get to Yeongju’s downtown area with either option.

On arrival, consider renting a car to take a look around the city and avoid waiting for the bus to the Scholars’ Village, which comes every hour or two.

Hiring a car for about 24 hours will cost you around 90,000 won, excluding gas, but as the major sightseeing spots mentioned in this article take from around 30 minutes up to an hour to drive to from one another, it will be the most effective way to manage your time.

Rent-a-car company officials will give you a ride to and from the bus terminal or the train station before you pick up the car or after you return it. Hire a vehicle in advance by calling a company such as Jo Eun Rent-car at (054) 632-0576 or Hanjin Rent-a-car at (054) 636-1001. You can book through Hanjin’s website, www.rentacar.hanjin.co.kr, too.