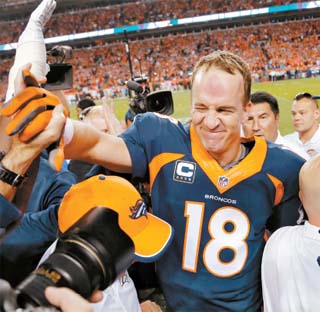 Denver Broncos quarterback Peyton Manning celebrates his 509th career touchdown pass with teammates during the first half of a game against the San Francisco 49ers on Sunday, local time, in Denver. [AP/NEWSIS]

“It’s special because of the way our team played,’’ said Manning, who surpassed Favre’s mark with an eight-yard strike to Demaryius Thomas late in the second quarter.

As he went to retrieve the ball, his teammates had some fun.

Thomas tossed the ball over Manning to Emmanuel Sanders, who lobbed it to Wes Welker. From there, Welker dished it back to Sanders, who flipped it to Julius Thomas - all of Manning’s favorite targets getting into the act.

“Those guys are all great athletes and my vertical leap isn’t what it used to be. I haven’t played keep-away since I was 8 years old,’’ Manning said. “That is something I will always remember.’’

The Broncos had actually talked about doing something like that, but Manning said he was surprised his teammates went through with it.

He shouldn’t have been, Thomas said, revealing that Manning actually had them practice it Friday.

“It’s easy. You did that when you were kids,’’ said Thomas. “It’s like keep the ball away from the guy in the middle.’’

Manning said he just didn’t think they’d go through with it.

Then again, Manning said he deserved to get picked on “based on my non-graceful play when I tripped on the play before. So, it is probably fitting. That was pretty funny. I’ll remember a lot of things about tonight, but I’ll definitely remember that part of it and the fact they had the guts to go ahead and go through with it.’’

Manning finally got the ball along with congratulations from his teammates and coaches. The souvenir won’t end up on Manning’s mantle, however - the Pro Football Hall of Fame has a nice spot all ready for it.

“I want to say congratulations for breaking the touchdown record,’’ said Favre. “I’m not surprised. You’ve been a wonderful player and I’ve enjoyed watching you play. I’ve enjoyed competing against you. I wish you great success for the rest of the season and the rest of your career.’’

Manning added a 40-yard TD throw to Demaryius Thomas after Aqib Talib’s interception in the third quarter that made it 28-10, and then Thomas set up another score with a 49-yard catch.

This time, running back Ronnie Hillman darted through the line for a career-long 37-yard run that made it 35-10. He later added a 1-yarder as the Broncos (5-1) discovered a ground game to go with Manning’s passing prowess.

Manning completed 22 of 26 passes for 318 yards with no interceptions to go with his four TD throws before taking the fourth quarter off.

“I’m not sure what their coaches do,’’ 49ers safety Eric Reid said. “They probably don’t have to do much. When he’s out there on the field, he recognizes the defense and makes audibles, he does it all. You’re playing against a coordinator when he’s out there. He’s definitely one of the best, if not the best, ever.’’

Thomas caught eight of Manning’s throws for 171 yards, giving him an eye-popping 27 catches for 521 yards receiving and five TDs over the past three games.

The 49ers (4-3) did very little right in seeing their three-game winning streak snapped. Their only real highlight was Colin Kaepernick’s four-yard TD pass to Stevie Johnson with 11 seconds left in the half that brought the 49ers to 21-10.

It was such a thorough thrashing that Coach John Fox was able to rest his regulars late in the game, which could prove crucial with the San Diego Chargers coming to town Thursday night.AP