Nongshim stirs up the competition with new blend

Nongshim stirs up the competition with new blend 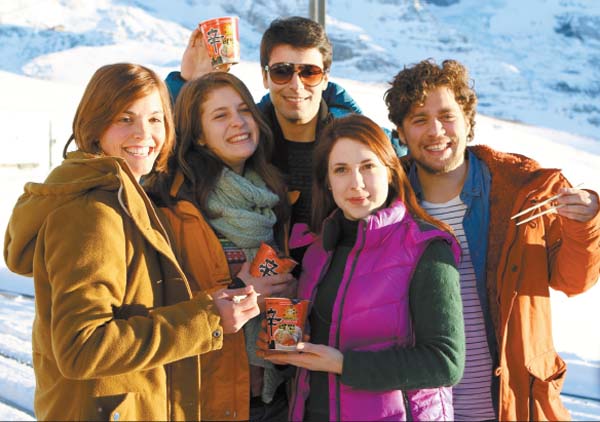 Korea’s top ramen maker Nongshim redesigned its package design and updated the taste of its popular product Shin Ramyun last August. This was the first change to Shin Ramyun since it first came out 28 years ago. The company hopes the fresh design and taste will appeal to a more global population. The upgraded Shin Ramyun now includes a spicier soup with noodles that are extra chewy.

Its performance in the global market is also on the rise. Even though competition is fierce with strong rivals from China and Japan, the unique “Korean taste” continues to attract consumers from more than 90 countries.

Shin Ramyun can be purchased from shops around the world, from the cafeteria at the Jungfrau summit, Switzerland, to Punta Arenas, the southernmost part of South America in Chile.

Since its launch in 1986, the ramen has served as a savory, spicy meal. Nongshim, which reached the top place in the industry, developed the recipe to reproduce the flavor of hot beef soup, one of Korean’s favorite soups.

Its unique blend was not made in a day. The research and development team gathered every kind of chili grown in Korea to test the product. They made dadaegi (a seasoning made with red peppers, soy sauce, ginger and garlic mostly used for noodles and soup in Korea) to compare their tastes. The team found the clue to make its own flavor from the seasoning.

Texture is also an important factor of Shin Ramyun’s popularity. To select the right thickness and chewiness, researchers tested around 200 noodles.

“I ate the amount equal to three packets of ramen a day to find the right cooking time and the right amount of water,” said a researcher that participated in developing the product.

Such endeavors allowed the good balance of the taste and texture of the noodles and soup.

The efforts paid off with steep increases in sales. In the first three months of 1986, its sales reached 3 billion won ($2.82 million). The next year, it skyrocketed to 18 billion won to reach the top of the industry. Shin Ramyun has kept its place ever since.

In the late 1990s, Nongshim built its smart plant in Gumi, North Gyeongsang. In the new factory, the entire manufacturing process was automatized and quickened. The whole process is monitored from the central control center. The number of people to the Gumi plant are strictly limited, and the belongings they bring into the plant are monitored so as to keep the production lines hygienic.

One production line makes 500 Shin Ramyun per minute. The five express manufacture lines produce about 3.15 million ramen cups and packets a day. Highly efficient production is needed to make up for massive consumption. A total of 23 billion ramen cups were sold since 2013. Last year, accumulated sales exceeded 8 trillion won. Shin Ramyun takes up 25 percent of the Korean market, with a share of 480 billion won out of 2 trillion won.

Its performance in the global market is also remarkable. Its yearly sales from domestic and international shops add up to 700 billion won. The product can be called food diplomat in that it is sold in not just nearby Asian countries like Japan or China but also on the top of Jungfrau mountain in Switzerland, Islamic nations in the Middle East, and South American regions such as Punta Arenas, Chile.

“We are planning to reach out to more global consumers and be the first in the Korean food industry to export to 100 nations,” said a Nongshim official.