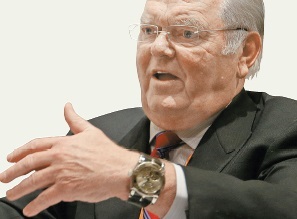 Korean shipbuilders led the global market for decades, and there were once more than 200 small and large shipyards in the country. But China has become the No. 1 shipbuilder, and even Japan beat out Korea last month.

According to a report by Clarkson Research in the United Kingdom, Korea was third in terms of outstanding orders in September, with 421,500 compensated gross tons (CGT) after China’s 922,800 CGT and Japan’s 551,800 CGT.

Herbjorn Hansson, chairman and CEO of Nordic American Tankers (NAT), one of the biggest crude oil carriers in the world with a total market capitalization of $704.8 million, may be the person Korean shipbuilders are happiest to see, as the 66-year-old executive has been a loyal customer. Daewoo Shipbuilding and Marine Engineering’s first tanker ever - the Jarena - was built to fill an order from Hansson in 1980 when he was an executive for Norwegian shipper Anders Jahre/Kosmos Group. As the top executive of NAT, he has ordered 20 tankers from Korean shipbuilders.

Last Wednesday, Hansson participated in the World Knowledge Forum in Seoul, then sat down with the Korea JoongAng Daily to talk about the crisis facing Korean shipbuilders and his management philosophy.

Q. What did you learn by attending this forum?

A. The best part is that it provides an opportunity to understand the world and the arena in which I work. It’s fun to see all kinds of different knowledge related to economic issues, including the global economic crisis and redistribution of wealth, coming to one place and being shared.

You are the most wanted man among Korean shipbuilders. Have you met any of them during your visit?

It is true that I have maintained good relations with many Korean conglomerates such as Hyundai Heavy Industries, Daewoo and STX, but I can’t tell you whom I met with during the time in Seoul [laughing].

Let’s talk a little bit about Korean shipbuilders and the situations they are dealing with. Hyundai Heavy Industries lost 1.2 trillion won ($1.1 billion) in the first half of the year and cut a third of its executive positions earlier this month. Korea has fallen behind China and Japan. Why do you think this is happening? Are Korean companies doing something wrong?

It is a hard question, but as you know, the global economy has consistently declined since the 2008 financial crisis that originated in the United States, and this is the type of business that has a huge cost. When you make something huge like vessels for someone outside your country, it is extremely hard work because all companies in the world have a different business focus.

For Hyundai Heavy Industries, I’m not in the position to judge them, because I’m only a business partner, but I can share what I have been trying to do during my career. I always try to maintain good relationships with shareholders, clients and business partners, because I believe they are the core elements that keep my business rolling. I think a good company like Hyundai knows what it should do and I believe it will bounce back for sure.

People say China has become a leading nation in the world economy, but we should remember it dominated the world economy about 2,000 years ago. I think we better say they are regaining the status they used to have. But I think the biggest concern for China is whether its economy can go on without democracy in the future. Their shipbuilding business, for instance, was able to grow because the government provided massive subsidies, but such a strategy might weaken companies’ competitiveness.

Your company is only 25 years old, but it looks like you have developed a very healthy business. What is your secret?

If you take too much debt, it turns out bad in the end - that is the one thing I always keep in mind. I run my company very conservatively. Unlike other tanker companies, for instance, we only have one type of vessel [the Suezmax vessel that can carry one million barrels of oil], and a homogeneous fleet reduces our costs and helps us generate returns.

Many business operators in general borrow huge amounts of money to pursue profit that isn’t guaranteed, but what those CEOs really had to do was to make their companies worth investing in. I think such ideas helped us have a strong dividend profile.

What is the key to running a company like yours safely?

It is managing risk. Fortunately, we don’t generally experience serious risk in terms of finance due to the nature of the business [considering that we’re a buyer], but we have to deal with many types of risks every day on the sea. Our ships sail more than 200 days a year in dangerous regions, such as near Somalia.

In September, one of our ships [the Nordic Passat] performed a rescue operation involving 150 refugees in the Mediterranean when the people [Somalis, Eritreans, Bangladeshis, Sudanese, and Palestinians from Syria and Lebanon] were in a wooden boat with engine trouble. I and my staff coordinated the operation successfully and it was able to be done well because I listened to my staff and advisers. I don’t run my business through a microscope.

What do you think the Korean shipbuilders need to improve on? Some say they need to build more fuel-efficient vessels.

It is only a small technical issue. Let me just say in general that what I think really matters is innovation. In order to innovate, you should know what you are best at and build strong relationships with employees to accomplish a goal.