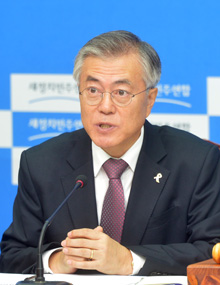 
Rep. Moon Jae-in of the main opposition New Politics Alliance for Democracy (NPAD) yesterday slammed President Park Geun-hye, dubbing her objection to amending the constitution a “dictatorial idea.” Park has made her stance against the amendment clear, referring to it in January as a “black hole,” even though some 150 lawmakers want to revise the current system to lessen the president’s power. They support a semi-presidential system with the president who is elected by universal suffrage and endowed with considerable powers, but with a prime minister who runs the government and is subject to a vote of confidence in the National Assembly.

Attending a party meeting yesterday, Rep. Moon, mentioned the fracas between the president and the ruling Saenuri Party floor leader Kim Moo-sung, who told the press while on a visit to China Thursday that discussion about a constitutional amendment will “explode” and that it “can’t possibly be blocked.” A day later he reversed his position and apologized to the president for stirring up a commotion on the issue while she was traveling in Italy. Kim stressed that he had no intention to engage in a “head-on collision” with the president.

“What’s problematic is both President Park’s remarks against a constitutional amendment and Rep. Kim’s apology,” said Rep. Moon, who leads a main faction in the largest opposition party. “President Park blocking what’s discussed within the National Assembly is an act overstepping her authority and is a dictatorial idea that ignores the principle of separation of legal, administrative and judicial powers.” He added that Park’s comments conjure up the “era of the Presidential Emergency Measure” in the 1970s.

The Presidential Emergency Measure No. 9 refers to a decree by President Park Chung-hee, the current president’s late father, that forbade citizens from participating in political activities, including making critical comments about his dictatorship. 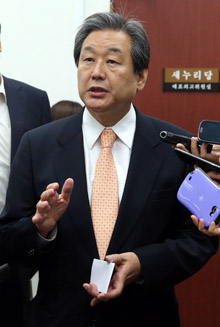 Rep. Moon was angry at the president gagging the head of the ruling party, according to his aide.

This is the third time that Rep. Moon, who was defeated by Park in the 2012 presidential election has used the word “dictatorial” to describe his former opponent. During the campaign in 2012, he said in a speech that his rival Park “represents a vestige of the May 16 military coup [in 1961] and dictatorship.” In April, Moon said the president’s disrespect for opposition parties is worse than under the dictatorships.

NPAD insiders believe Rep. Moon’s remarks yesterday signal he’s aiming to win a party leadership election scheduled for next year. A public showdown with the president will bring him publicity.