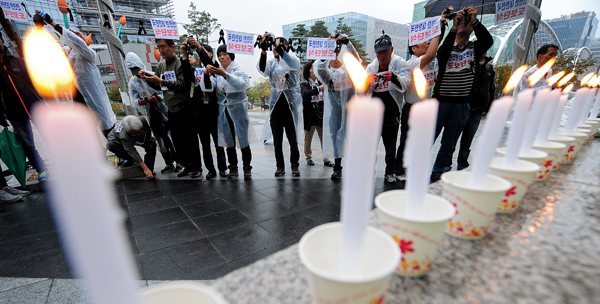 Citizens light candles yesterday in honor of the victims at the scene of the fatal accident at Pangyo Techno Valley in Seongnam, Gyeonggi. [NEWS1]


The families of the 16 victims who died Friday after the ventilation grate on which they were standing collapsed at an outdoor concert in Seongnam, Gyeonggi, agreed yesterday to terms for compensation.

The arrangement was finalized after an all-night negotiation session with an emergency countermeasure committee headed by Seongnam Mayor Lee Jae-myung and the organizers of the event where the fatal accident occurred.

The victims were among about a thousand people who had gathered to watch a free outdoor K-pop festival last week at Pangyo Techno Valley.

More than two dozen spectators climbed atop a raised ventilation platform to get a better view when the steel grate caved in from the weight, plunging them more than 18 meters (60 feet) to the ground below. Eleven people were seriously injured in the fall in addition to the 16 victims.

According to the emergency countermeasure committee, the festival’s organizers, which include the online economic news website Edaily, a subsidiary of Edaily TV, and the Gyeonggi Institute of Science and Technology Promotion (Gstep), will take responsibility for the accident and pay compensation to the relatives of the deceased.

The exact amount has not been determined, though the sums will be approximately 60 percent of the expected lifetime earnings of the victim, plus 40 million won ($37,741), which the committee explained was in accordance with precedents in similar cases.

“We admitted that the victims were also 40 percent liable for the accident,” said a relative who took part in the negotiations. “We took into account that the host of the festival warned them not to climb up on the ventilation shaft and [acknowledged] that they were old enough to be aware of the risk.”

The two organizers are also expected to provide a 25 million won funeral expense for each victim.

The compensation will be made within 30 days of the relatives’ request. If the organizers fail to pay them on time, they are bound to pay interest at a 5 percent annual rate. It was determined that Edaily would allot funeral expenses first, within a week, but the exact percentage that each organizer will pay has not yet been decided.

Edaily Chairman Kwak Jae-seon met with the relatives and said that he would help with tuition fees for the victims’ children.

But though both parties were able to come to an agreement, the process itself was rocky.

The relatives were reportedly dissatisfied with the amount of compensation offered by Edaily and Gstep. On Sunday at around 9 p.m., the organizers actually left the negotiating table, saying they could not afford to pay more.

The relatives requested a press conference to be held at 10 p.m., just before the organizers returned and managed to reach a consensus. The agreement was struck around 3:20 a.m. yesterday.

“We appreciate the Edaily and Gstep for being sincerely engaged in handling the accident and also the emergency countermeasure committee for continuing all-night negotiations,” Han Jae-chang, a representative for the relatives, said at the press conference held yesterday. “We also wish that the punishment to the organizers be minimized, given that the accident was unexpected.”

The square where last week’s accident occurred had apparently also been selected as the venue for another festival to be hosted by the city’s government.

According to a document acquired by the JoongAng Ilbo, the Seongnam government was set to allot 250 million won for a festival it had organized and scheduled for the end of the month. The municipal government said it was reviewing the cancellation of the event, however, in light of the tragedy.

The Seoul Metropolitan Government has since launched a complete inspection of the ventilation grates around the capital, many of which were found by the JoongAng Ilbo to be neglected or lacking maintenance.

“We are set to organize teams comprised of civil servants and experts to inspect [the city’s] ventilation shafts and set up safety guidelines,” said Kim Hyun-sik, the head of the Seoul government’s urban safety office.