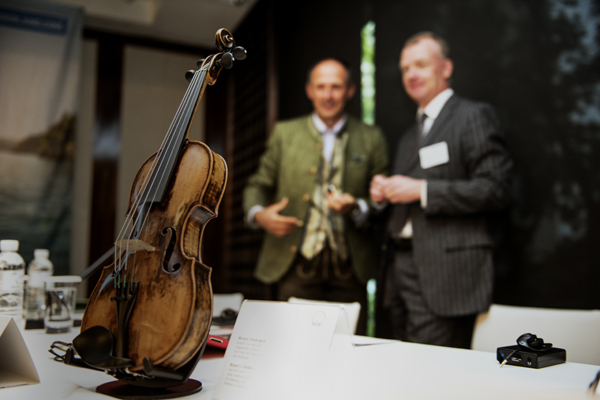 The mayor of Salzburg, Wilfried Haslauer, introduces a violin that Mozart used to play when he was a young boy during a press conference held Monday at the Westin Chosun Hotel, central Seoul.Provided by the Salzburg State Board of Tourism


A violin that Wolfgang Amadeus Mozart once used as a young boy was introduced to Korean media for the first time on Monday by the mayor of Salzburg, Wilfried Haslauer.

The Salzburg State Board of Tourism held a press conference at the Westin Chosun Hotel in central Seoul on Monday to promote tourism to the Austrian city of Salzburg, where Mozart was born and spent his childhood.

The violin, which is one of six original violins used by the composer that are still in existence today, was created by Andreas Ferdinand Mayer in 1735 when Mozart was 8 years old. This is the first time the musical instrument - deemed “priceless” - has traveled to Korea. Prior to this trip, the violin had only traveled to China in 2009 and Japan in 2011.

“It is a priceless instrument, and it takes a lot of time and effort to bring it to a country. I wish Koreans know what it means,” said Dr. Johannes Honsig-Erlenburg, a representative of the Mozarteum Institution who is also part of the tourism delegation.

“It was an amazing experience,” said Park after the performance. “I was worried that the instrument might not make any sound, but it sounded perfect.”

Salzburg is located in Austria, central Europe, and 70 percent of its land is covered in the Alps. Due to its geographic location, its scenery is stunning and it has been considered an area of culture since the Middle Ages. According to the tourism board, the locale inspired Mozart’s masterpieces.

Salzburg is also famous as the background for the movie “The Sound of Music.” To celebrate the 50th anniversary of the film, a special gala show will be held next October in Austria’s fourth-largest city. Other performances such as marionettes, musicals and concerts will also be performed during the festival. The city is lining up more festivals for next year, ranging from Mozart Week to Salzburg Festival from January through to July.

“Although it is a small state, there are various historic architectures and plenty of cultural places to visit, such as Mozart’s house and shooting sites of the popular film, ‘Sound of Music,’” said Mayor Haslauer.