Royal road in Seoul will be restored

Royal road in Seoul will be restored 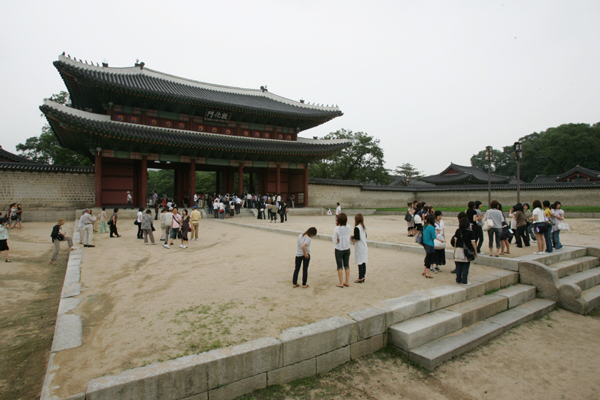 The road in front of Changdeok Palace’s 600-year-old Donhwa Gate will be refurbished by 2016. It is the only major Joseon Dynasty (1392-1910) road that retains its original width and structure and is one of two royal roads that runs from north to south. A facility will also be built at the gate to house traditional music and culture. [JoongAng Ilbo]

The Seoul Metropolitan Government is planning to restore the only remaining royal road in Seoul that retains its original width and structure.

The road leads to Donhwamun, or Donhwa Gate, of Changdeok Palace, which is deemed the most beautiful royal residence in Korea. Donhwa Gate is the main entrance to Changdeok Palace, a Unesco Cultural Heritage site in central Seoul. During the Joseon Dynasty (1392-1910), the king and his officials used the opening for royal processions to Jongmyo, the ancestral shrine of the royal family. The gate was also used as an entrance to tour the city and other palaces.

Although Gyeongbok Palace was the official palace of the Joseon era, the kings of Joseon stayed at Changdeok Palace for longer periods of time.

Come 2016, the approximately one-kilometer (0.6 mile) road that stretches southward from the gate will be reconstructed. 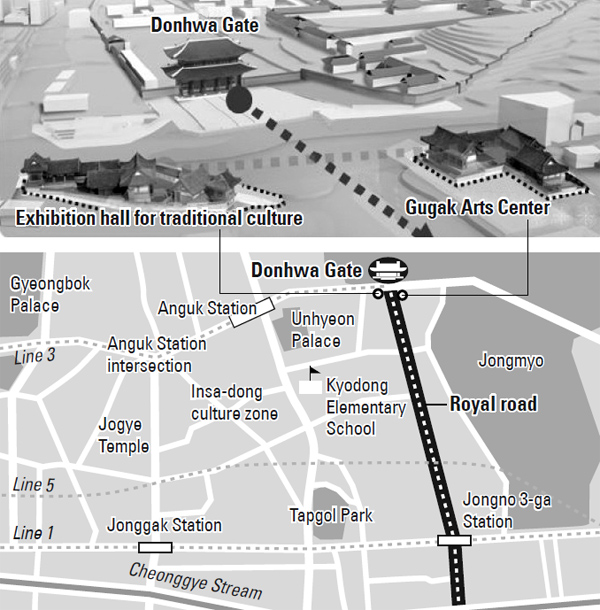 The Seoul government is also planning to build a Gugak Arts Center right across Donhwa Gate and a nearby exhibition hall for traditional culture. (Gugak is the local term for traditional Korean music.)

The area around Changdeok Palace has a strong connection with gugak as it was home to Yiwang Aakbu, a royal organization for music, now the National Gugak Center. The Joseon Research Center for Vocal Music was also located nearby, which opened in 1933.

“The Jongno area and the Insa-dong area are where foreign tourists flock to, however, there weren’t many places in those areas where they could enjoy traditional Korean music,” said an official with the Jongno District, where the palace is located.

“At the Gugak Arts Center, they will be able to listen to Joseon court songs like ‘Yeominrak’ and ‘Yeongsanhoesang.’ ”

An exhibition hall for traditional culture, which will be dedicated to the lives of common people, will be built right next to the Gugak Arts Center.

The road in front of Donhwa Gate used to be filled with merchant shops, and Joseon kings were able to study people’s lives and public sentiment there. Seoul officials expressed hope that the two centers - to which some 45.6 billion won ($42.88 million) is being allocated - will offer a look into both royal and common people’s lives.

Construction work is already under way.

A gas station that was right across Donhwa Gate for decades was removed in 2012. As criticism mounted that situating a gas station on what used to be a royal road was inappropriate, the Seoul government announced plans to remove it in 2008 in order to preserve history and tradition in the area.

But the budget for the plans was not set aside until 2012. With 20 billion won allotted, the city bought the land the gas station was built on and tore the building down.

The criticism was understandable. In addition to being the only major road from the Joseon era that retains its original width and structure, it is also one of two roads used by Joseon royalty that runs from north to south. The other is Sejong Road, which is situated in front of Gyeongbok Palace’s Gwanghwamun.

Besides that, the road has much potential, officials and historians say. Apart from the fact that it connects Changdeok Palace and Jongmyo, it also connects it with the Daehangno area to the east; Insa-dong, the Samcheong-dong and Bukchon areas to the west; and Cheonggye Stream and Myeong-dong to the south. In other words, it is at the core of downtown Seoul’s tourist hotspots.

“The refurbished road will have much value in that past scenes will be recreated in 21st-century Seoul according to history,” said Lee Sang-koo, an architecture professor at Kyonggi University.

Officials are also considering banning vehicles on the road once the refurbishment is complete.