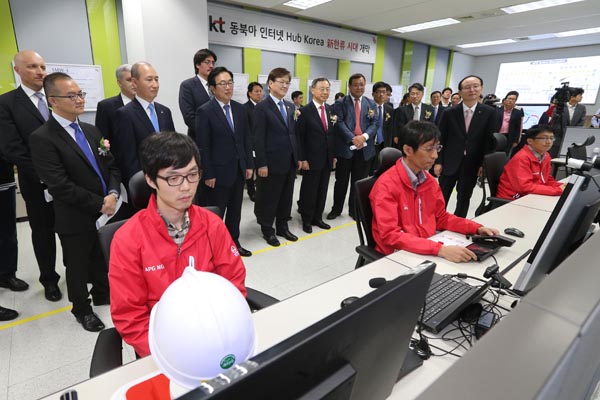 Korea is now officially the center of Internet connectivity of nine Asian countries including Japan and China after KT launched an integrated control center that will manage a submarine cable network dubbed the Asia-Pacific Gateway (APG) yesterday.

The control center will not only provide faster but also more stable transmission of data than existing connections.

Eventually, the submarine cable network is expected to extend across the Pacific Ocean to the United States.

The cable network connecting nine Asian countries from North to Southeast Asia is still under construction. Once it is completed next year, sending a Facebook message to a friend from Seoul to Tokyo will be faster and more stable. People watching a live sports game like a European League soccer match won’t have to suffer the frustration of a slow feed or disconnection thanks to the stronger connectivity.

Currently, there is no technology that directly connects wireless transmissions like Wi-Fi or LTE services between countries. There are two ways that data is transmitted between countries: underwater cables and satellites.

To exchange wireless data between different countries, uploaded data is transmitted to a local control center, which is sent to the submerged cable that travels to the other country. A control center in the receiving country converts it back to wireless form and transmits it.

An integrated control center in Haeundae, Busan, will be managing the APG as well as the different control centers of mobile carriers scattered across the nine Asian countries.

“About 70 percent of the 11,000 kilometers of submarine cables have been constructed already and so we opened the integrated control center for the APG,” said Chung Woo-hyun, KT’s PR manager.

Some 13 companies are participating in the construction of the APG including KT, China Mobile, China Unicom, China Telecom, Japan’s NTT, Singapore’s StarHub and Facebook.

The Korean mobile carrier also signed a memorandum of understanding yesterday with mobile carriers including China Mobile and China Telecom on the construction of the New Cross Pacific (NPC) cable system, a submerged cable network between Asia and North America. The NPC is targeted at servicing at the end of 2017.

“Through the APG and NPC, and a 14,000-kilometer international submarine cable connecting Asia and North America, we will contribute to the development of Korea’s ICT industry. It will allow digital products and Korean content to be retailed smoothly in the borderless Internet world.”