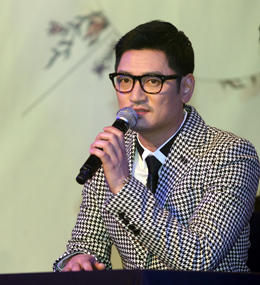 Singer Bobby Kim held a showcase and a press conference yesterday to promote his newest studio album “Mirror,” his first in four years.

During the press event held in Jamwon-dong, southern Seoul, the 41-year-old singer said he tried to “show many sides” of himself through the 12-track album.

“I think I have been shown as a ballad singer to the public over the past four years,” said Kim, who is known for his hit songs like “Love ... That Guy.”

“So I tried to fill this album with different genres of music for this time.”

For the title track, however, Kim chose “Apology,” which is a ballad that was written by Lee Juck, a singer-songwriter and a close friend of Kim.

Kim’s father also collaborated on the album. He played the trumpet on the title track.

Another musician friend, Wheesung, also wrote the lyrics for “My Own Way” while actress Kang Hye-jeong, the wife of Epik High’s Tablo, also penned the words to “Good Thing.”