Fliers flown to North remain a source of debate

Fliers flown to North remain a source of debate 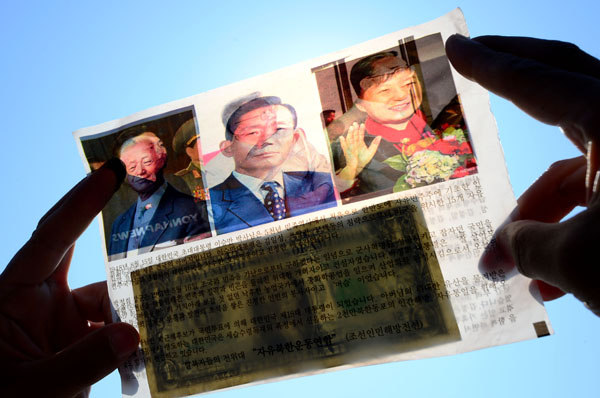 
Waterproof papers listing facts about North Korea’s ruling Kim dynasty and contrasting portraits of the country’s impoverished population with the South’s economic prosperity may seem insignificant to the eyes of the outside world - perhaps even justifiable.

But those leaflets have recently emerged as a source of controversy and contention that could potentially decide the course of inter-Korean relations. The reclusive Communist regime has reacted with extreme sensitivity to the documents, which a number of civic groups launched inside balloons earlier this month near the border.

Some analysts contended that the visit by a high-ranking North Korean delegation to the South on Oct. 4 pointed to signs of a thaw in relations.

The delegation, presumably led by North Korea’s second most powerful statesman, also agreed to high-level government contact. But the rare mood of reconciliation was short-lived when the North fired across the demilitarized zone (DMZ) the following week.

Civic groups, most of them led by North Korean defectors, launched balloons on Oct. 10 containing at least 1.5 million leaflets critical of the regime. They were launched from Paju and Yeoncheon in northern Gyeonggi, near the inter-Korean border.

In response, the North fired machine-gun rounds at the balloons - fire that the South Korean military returned from Yeoncheon.

After the gunfire exchanges, Pyongyang declared that no high-level talks would take place unless the Park Geun-hye administration stopped the groups in question from sending the fliers. The main opposition New Politics Alliance for Democracy (NPAD) also urged the government to take action, particularly because the skirmishes threatened the safety of South Korean residents nearby, with Saenuri Party Chairman Kim Moo-sung adding that it was undesirable to provoke the North unnecessarily.

Residents from Yeoncheon and Paju even stated that they would physically prevent the activists from launching the leaflets if need be.

But while parties in South Korea have acted to dissuade those civic groups, their leaders have been resolute in their cause. Park Sang-hak, who heads Fighters for a Free North Korea, one of the primary campaigners, said he would not be deterred.

His organization and seven other groups have already said they will send 100,000 leaflets to the North at 1 p.m. on Saturday from Paju.

“In May and June, the North sent more than 30,000 fliers critical of South Korea,” Park said in a recent interview with the JoongAng Sunday. “And the military collected them and made them public at the National Assembly hearings. They contained insults aimed at President Park Geun-hye. Isn’t the North the one trying to hinder the dialogue? Why is it OK for the North to send the leaflets but we cannot?”

Park, a North Korean defector who has worked to send anti-Pyongyang leaflets for the past decade, said the regime reacted sensitively because the fliers are an extremely effective tool.

“If they were not effective, why would the North react so hysterically?” he said. “Last year alone, we had about 2,000 defectors, and dozens of them told me later that they realized the truth and decided to escape. They said I’m famous in the North.

“This is proof that the leaflets are effective.”

According to Park, 80 percent of the leaflets land near the inter-Korean border, in areas where approximately 600,000 young North Korean soldiers are stationed.

“The goal is to make them turn their guns from the South and toward Kim Jong-un,” the civic group leader said. “And the leaflets are working. Last year, two North Korean soldiers defected here and told me they realized what a bad person Kim was after reading them.”

He continued, saying North Korean officers often collect the papers because they want the dollar bills sent along with them.

“The hereditary power succession in the North will end after this third generation,” Park said. “Until the era of Kim Jong-il, North Koreans were loyal to him, but their feelings toward the leadership have changed to hatred in the Kim Jong-un era.”

As civic groups prepare for another round of launches across the DMZ this weekend, the government has stated that it has no intention of physically stopping them, despite threats from the North Korean military.

“There are no legal grounds for the government to stop them,” said Lim Byeong-cheol, a spokesman for the Ministry of Unification. “Stopping them using police force doesn’t support our stance.”

However, the administration, he said, will still contact the civic groups and advise them to act prudently.

“The government is well aware that the situation has become more serious,” he said. “We will monitor the North’s movements and come up with proper measures.”

Sending leaflets has a long history in both Koreas since the 1950-53 Korean War and was one of the key elements in psychological warfare. The South Korean military and UN troops previously sent fliers targeted at North Korean soldiers, urging them to surrender. The papers were then used as a guarantee for their safety once they handed themselves in.

In the 1950s and 1960s, when the North was more economically powerful than the South, it would send fliers urging South Koreans to defect and promised apartments and cars.

But after the South’s gross national income reached $212, surpassing the North’s $194, in 1969, the situation was reversed. The South Korean government led programs responsible for disseminating anti-Pyongyang leaflets by the thousands. With the military’s cooperation, the fliers were sent from areas inside the DMZ closer to the inter-Korean border, and the Air Force provided information on weather conditions to accommodate them.

But the two Koreas have also gone further, airing propaganda broadcasts at the border.

The psychological war between Seoul and Pyongyang only ended in 2004, once the South accepted the North’s consistent demands to stop broadcasting propaganda and sending leaflets. Since then, civic groups in the South have taken over that responsibility.

The South Korean government and the business community do not provide any financial support for civic groups that want to send fliers and other materials across. Park, the leader of Fighters for a Free North Korea, confirmed this.

Sending 500,000 leaflets, he said, costs about 5 million won. “With our annual budget of 150 million won, we send leaflets about 30 times a year,” he said. “Among them, we only make public three occasions. If we don’t publicize, we lose the donations.”

Yet as activists maintain that the North’s gunfire cannot deter their campaigns, lawmakers from both the ruling and opposition parties have expressed concerns that the fliers will only aggravate the North’s reclusive leadership.

“North Korea is a country that is surrounded by mysticism and secrecy,” NPAD Rep. Ahn Gyu-back said yesterday in an interview with PBS radio. “I think the North wanted to test the South’s readiness through this recent series of provocations, while making armed demonstrations against the launched fliers.”

He added that sending balloons containing propaganda materials to the North could technically be stopped under current South Korean laws, citing the previous Lee Myung-bak administration’s efforts. These civic groups, he continued, must stop their activities because they could cause a battle at the border.

“The importance of feeding outside news and the truth to a closed society like North Korea cannot be stressed enough,” Ha said in a recent press release. “It is an essential element to facilitate change in the North and achieve unification.”