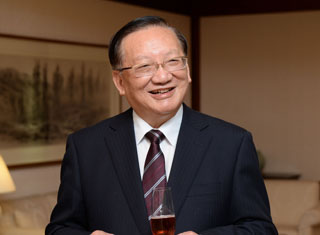 Former Chinese State Councilor Tang Jiaxuan met with President Park Geun-hye ahead of an upcoming bilateral summit with President Xi Jinping in Beijing on the sidelines of the Asia-Pacific Economic Cooperation (APEC) summit next month.

Tang, who served as foreign minister from 1998 to 2003, revealed yesterday at the Blue House, “In a fortnight President Park will participate in the APEC leaders’ summit in Beijing,” and that at that time, she “will hold an important bilateral summit with President Xi Jinping.”

This will mark the fourth summit between the two leaders since their inaugurations.

At the Asia-Europe Meeting (ASEM) in Italy last week, Chinese Premier Li Keqiang expressed to Park his support for high-level contact between the two Koreas to improve inter-Korean relations.

In regards to this, Tang said, “President Park and Premier Li held successful talks at ASEM.”

Seoul proposed to Pyongyang to hold the second round of high-level inter-Korean talks on Oct. 30 but has yet to hear a response.

Tang, a state councilor from 2003 until 2008, is an expert on Korean Peninsula issues.

He added that Park is “a highly respected and valued guest in China and can be called a friend who shows a lot of affection for the Chinese people.”

They first met in 2001 when Park, then a lawmaker of the Grand National Party, the precursor to the ruling Saenuri Party, was a member of the National Assembly’s Foreign Affairs, Trade and Unification Committee. She visited China when Tang was foreign minister.

Park last met with Tang at the Blue House in June 2013, ahead of her visit to Beijing for a summit with President Xi. Tang also played an important role when Seoul and Beijing established diplomatic relations in 1992.

He led a Chinese delegation on a two-day visit to Seoul for a Korea-China leaders’ forum and held a luncheon with the National Assembly Speaker.