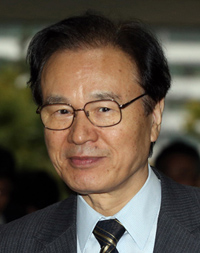 The first meeting between the men in Seoul yesterday prompted speculation that the first bilateral summit between President Park Geun-hye and Abe will finally be realized. Analysts questioned whether Yachi would deliver a personal message from the prime minister to Park.

In Yachi’s first visit to Seoul since he became the first head of Japan’s National Security Council (NSC), which was created last year, he called for an improvement in bilateral relations next year, which marks the 50th anniversary of the normalization of bilateral ties, the Blue House said in a statement yesterday.

According to the Blue House, Kim said, “Marking the 50th year of the normalization of Korea-Japan ties, there is a need to put sincere effort into forging relations for a future-looking relationship.”

Kim emphasized that cooperation between the two countries is important not only for bilateral relations but for peace and stability in the Northeast Asian region.

He added that for this to happen, Japanese political leaders have to put sincere efforts into healing the scars of the past, especially in regards to resolving the issue of the Japanese Imperial Army’s sexual enslavement of women during its colonial rule of Korea, also referred to as the comfort women issue. This reinforces Seoul’s position that unless there is progress in resolving the comfort women issue, a leaders’ summit is unlikely to happen.

The two also exchanged views on North Korea’s nuclear and missile threats, said the Blue House, in order to “work closely together” on this issue in the future.

Kim described for Yachi the recent trends in North and South Korean relations, and likewise, Yachi explained the recent contacts between Pyongyang and Tokyo in regards to resolving the decades-old issue of abduction of Japanese nationals by North Korea.

Yachi added that Japan will work closely with Seoul and also trilaterally with South Korea and the United States in any sort of negotiation with Pyongyang.

On broader defense issues, Yachi discussed the U.S.-Japan bilateral security treaty, which will be updated for the first time in 17 years. These changes come as Japan is moving away from a pacifist interpretation of its post-war Constitution.

Japan’s NSC, modeled after the U.S. National Security Council, was launched in January as part of Abe’s push for Japan to boost its role in regional security. This also includes Japan’s move to exercise its right to collective self-defense, or to come to the military aid of an attacked ally, which raises concern among neighbors that Tokyo is returning to its militarist past.

Since the launch of its NSC, Japan has submitted several requests to the Blue House for a meeting between Yachi and Kim. The Korean presidential office didn’t agree, citing Korea’s unfavorable public sentiment toward Japan. Yachi is in Seoul for a two-day visit that runs until today. He also met with the minister of foreign affairs, Yun Byung-se.

The Japanese media reported that Yachi accompanied former Prime Minister Yasuo Fukuda when he secretly met with Chinese President Xi Jinping in Beijing in July, also seen as a move to pave the way for a future Japan-China summit. Xi has refused to hold a summit with Abe over similar historical and territorial issues.

The leaders of the three Northeast Asian countries are expected to attend the upcoming Asia-Pacific Economic Cooperation (APEC) forum in Beijing on Nov. 10 and 11.