From sidelines to front office, Cho ready to go

From sidelines to front office, Cho ready to go 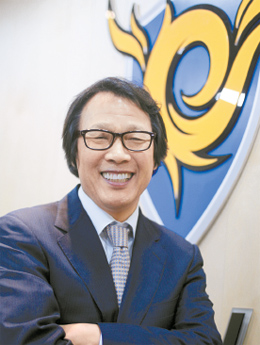 Cho Kwang-rae is the new general manager and president of Daegu FC. By Kim Min-gyu

“Football isn’t about marketing and advertising,” said Cho Kwang-rae, general manager and president of Daegu FC in his Gyeongsang accent. “We must go back to the fundamentals and football itself.”

The 60-year-old former manager of the national football team was hired as general manager of the Daegu team on Sept. 18 and was appointed president on Oct. 1. Holding both administrative positions gives him full authority over the club’s operations, a career change for someone who has specialized in on-field management.

From 1999 to 2004, he managed Anyang LG, which later became FC Seoul, and won a league championship and the FA Cup. He coached Gyeongnam FC in 2007 and was appointed manager of the national team in 2010.

He could have continued his career in the first-division K League, but chose to become an administrator for Daegu FC, a team that was relegated to the second-division K League Challenge last year.

His days have been busy lately, but he didn’t seem tired when he sat down with Ilgan Sports, an affiliate of Korea JoongAng Daily, at Daegu World Cup Stadium on Oct. 16. His voice was as powerful and his face as animated as ever.

Q. Why did you choose to start an administrative career in Daegu?

A. From the time I was a player, I felt Daegu was passionate about football. I felt sorry that the team that once brought in 40,000 people to the stadium went down to the second division, and I was sure I could revitalize football in the city.

How do you feel after leading the club nearly a month?

Since Daegu FC is owned by the citizens, we can’t afford new players whenever we please. We need to focus on developing existing players. I was surprised when I visited the players’ lodgings, because it took an hour to get there from the stadium. How can we train them properly in such circumstances? I know my predecessors worked hard, but they were heading in the wrong direction. They didn’t focus on the football itself. It’s been more than 10 years since the club was founded, but it still doesn’t have a clubhouse. For a football club, the football is the most important thing.

Are you saying that you are going to focus on the players?

Yes. I will secure a clubhouse and training field. My top priority will be training the players. I already assigned more of the budget to players and the youth team. I’m also working on how to keep prospects from leaving. If Daegu is on top of the first division, marketing and advertising will naturally follow.

Some people are skeptical about an administrator with only a football background.

I feel a lot of pressure. But I’m different from other administrators because I’ve come up through the ranks. I’ve managed both strong and weak teams and even headed the national team. It would be a big mistake if I weren’t prepared, but I have worked on it from when I was a manager. Park Ji-sung and Lee Young-pyo are also trying to become administrators. I want to lead the way.

Do you still emphasize “do it solidly” as an administrator?

Yes. The true meaning of “do it solidly” is indefinite freedom and indefinite responsibility. I always tell people with the club that they can do whatever they want to do as long as they take responsibility. Nobody needs to be interrupted, because professionals do well on their own.