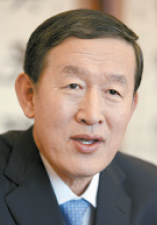 Amid challenging times in the oil and construction businesses, GS Group Chairman Huh Chang-soo has urged his staff to do everything possible to overcome the situation.

In a meeting with 150 executives at the GS Tower headquarters in Nonhyeon-dong, southern Seoul, the 66-year-old warned, “This crisis will be repeated again and again if we don’t change ourselves.

“There are conditions that have put us in such a difficult situation like unstable international oil prices, the foreign exchange market and bad economies in many nations where our major international clients are located,” he said. “But there is no time for us to just sit back and complain about such circumstances.”

Huh said that the company needs to improve its overall business systems, including sales and marketing, in order to find new business opportunities.

“We need to keep in mind that we should try to innovate our overall business plans and strategies,” he said. “I want all high-ranking executives to step forward to bring in necessary changes so that subordinate officials can learn and follow to make this company survive for the next 100 years.”

Huh, who also leads the Federation of Korean Industries, encouraged the executives to study the Southeast Asian nations.

“Considering the region’s population and its natural resources, potential economic growth is huge,” he said. “The region could be a very important bridgehead for GS to become a global company.”

GS Group, the nation’s eighth largest conglomerate, reported 27.8 billion won ($26.4 million) in net profit on a consolidated basis for the second quarter of the year, a 46.2 percent drop from a year earlier. It said the poor performance of oil business affiliate GS Caltex, which suffered a 37.8 billion won net loss during the period, heavily affected the group’s overall performance.