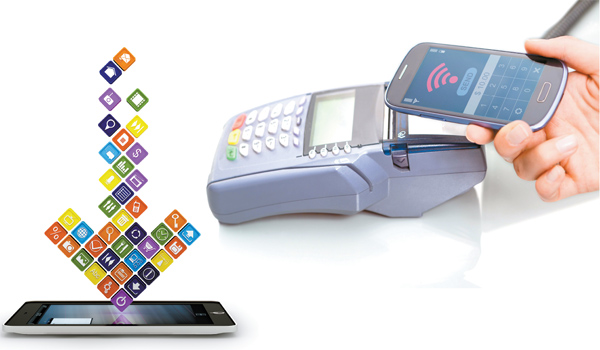 Two weeks ago, Line, the mobile messenger created by the Japanese arm of the Korean IT company Naver, announced it would launch its own mobile pay service during a conference held at Maihama Amphitheater in Tokyo.

According to the company, users can make purchases both online and at traditional retail stores using the messenger app. The user needs only to link the credit cards with the messenger account or to charge it up through Mizuho or Sumitomo Mitsui banks.

The payment services don’t end there. Line users who are friends can split the check using the messenger app’s “share payment” service and transfer money to each other without having to input bank information through the “send money” feature. 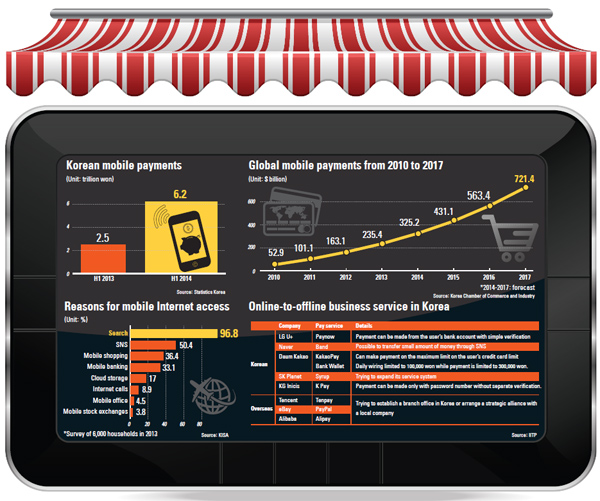 The company plans to further use the payment service by connecting it to taxis using Line Taxi as well as a food delivery service that links to restaurants called Line WOW.

The goal is to expand the use of Line Pay by offline businesses.

“Line’s expansion into the on-demand e-commerce market will allow us to further deepen the bond we have with our users and allow us to provide them with services as an infrastructure for their lives,” says Jun Masuda, Line’s chief strategy and marketing officer. “We also plan to couple this new service with Line Pay, the new payment service planned for release in the near future.”

A month earlier, Daum Kakao launched its own mobile payment service Kakao Pay, which allows credit card purchases via the messenger app without the hassle of an authentication certificate. Like eBay’s PayPal, the user needs only to punch in a password for the payment to be made. Although Kakao Pay is currently available only on Android smartphones, the company says 1.2 million subscribers already use the payment service. The Apple iOS version will debut next month.

In addition, Daum Kakao plans to launch its Bank Wallet service, which allows payments and other transactions through collaboration with banks. Users will be able to load a maximum of 500,000 won ($475) and tap into the messenger app to make purchases up to a total of 300,000 won a day without having to go through an authentication certificate. Payments exceeding the ceiling require the use of a certificate.

Another feature of Bank Wallet is that subscribers can wire as much as 100,000 won a day through the messenger app to a friend or family member.

During a press conference earlier this month to celebrate the merger of Daum Communication and KakaoTalk, Daum Kakao also outlined its business plan. It was very much similar to the one that was unveiled by Line, which is to provide connectivity in every aspect of life. This includes partnering with offline businesses.

It has become evident that IT companies no longer stick to developing games and apps, but branching out to the financial market.

According to Statista, a global statistics portal, the global mobile transaction volume in 2010 was $52.9 trillion compared to $235.4 trillion last year. Mobile payments this year are expected to expand by 38 percent to $325.2 trillion and in three years to $700 trillion.

The country’s mobile carrier industry estimates that eight out of 10 people own a smartphone.

Online shopping mall solutions company Godomall reports that purchases made via personal computers in the first half of 2014 grew 34 percent year-on-year and mobile purchases shot up more than 274 percent. During the same period, the number of online shopping malls with mobile services has grown 164 percent.

“The mobile shopping market is growing so fast that even the online shopping association had to change its forecast for this year from 7.6 trillion won to more than 10 trillion won,” says Lee Chul-woo at Godomall.

A survey last year by the Korea Internet and Security Agency of 6,000 households showed mobile shopping was the third most popular smartphone activity (36.4 percent of respondents), after searches (97 percent) and social networking services (50 percent).

While Korean companies are jumping into the race, mobile financial services already are available in China and the United States.

Market experts say the biggest obstacle for mobile payment services provided by IT companies is regulations on electronic transactions, such as requiring cumbersome authentication procedures, and restrictions that block nonfinancial companies from expanding into the field.

“Such regulations are a stark contrast to overseas markets where IT companies have their own license to provide financial services that offer direct payment acceptance and transaction services,” says Sean Chang, an analyst at Samsung Securities.

One bans companies from transaction services unless they have at least 2 billion won in capital, and they must have 5 billion won to issue and manage electronic currencies.

“Under these regulations,” says Chang, “it is really difficult for nonfinancial companies to enter the financial market in Korea.”

This is only the beginning. Under another regulation, in order for a company to store credit card information, it needs to get government approval as a credit card company.

“Of course, IT companies could ask the government for approval to provide financial services, but it isn’t easy,” Chang said.

The analyst added that it is very difficult for most IT companies, particularly start-ups, to meet the requirements stipulated by the regulations.

“Finding that amount of money is very difficult and when conglomerates try to enter, they will likely be restricted to various regulations that force the separation of nonfinancial affiliates,” says Chang.

Another challenge Korean IT companies face is a lack of partners that accept the alternative payment system.

The key has been the so-called online-to-offline business, or O2O, which has become a blue ocean for IT companies, and the recent exponential growth of mobile shopping has triggered IT companies to test the water.

“The local payment market faces a new turning point with the launch of Kakao Pay and Line Pay,” says Park Hye-jin, an analyst at Korea Investment and Securities. “For the two companies to succeed, they need to advance beyond the mobile market and expand into offline as well.”

Park says that what PayPal lacks and Alipay has is vast connections and partnerships with offline businesses.

“The more stores and businesses accept the mobile payment system, the more it will be chosen by consumers as a new payment alternative,” the analyst adds.

A lack of infrastructure and daily transaction limits make it difficult for mobile payment services to make headway in Korea.

“Mobile payment is an inevitable course and the government will not be able to ignore that Korea is falling behind a changing paradigm,” says Chang of Samsung Securities. “Regulations set up to protect existing institutions will only deprive the country of opportunities from which it would benefit.”