Lost but then found ­

Lost but then found ­ 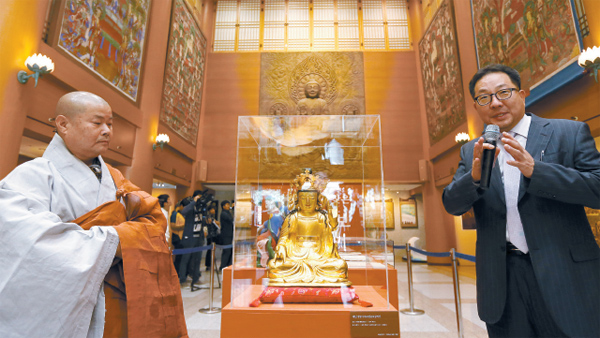 At the Korea Buddhism History and Culture Memorial Hall in Jongno District, central Seoul, yesterday, Choi Seon-il, right, an expert in cultural properties, explains the 17th-century giltwood artwork of a seated Bodhisattva that was in the possession of the Jeongbang Temple in Jecheon, North Chungcheong, before it was stolen and eventually recovered. Standing on the left is the chief monk of the temple, Sangin. The Seoul Metropolitan Police Agency said through a collaboration with the Jogye Order of Korean Buddhism and the Cultural Heritage Administration, it has arrested 13 people who stole Buddhist relics and confiscated 48 relics stolen from 20 temples since 1988. The Jogye Order is holding an exhibition of the relics at the memorial hall through today. [NEWS1]