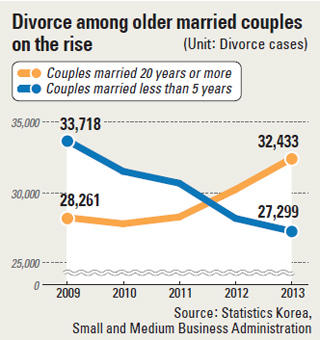 More married couples are getting divorced after just a couple decades together, according to an almanac published yesterday by the Office of Court Administration at the Supreme Court.

When it came to the primary reasons for divorce among those with decades-long unions, irreconcilable differences was cited most, accounting for 47.2 percent, followed by financial problems (12.7 percent), adultery (7.6 percent) and conflicts between family members (7.0 percent).

Divorces among newly married couples followed. The number of cases in which couples married for less than five years split last year stood at 27,299, or 23.7 percent.

Compared to those married for 20 years or longer, divorce among new couples has steadily decreased since 2009, giving the top position for the number of divorces to older married couples in 2012.