Koreans no longer go against the grain

Koreans no longer go against the grain 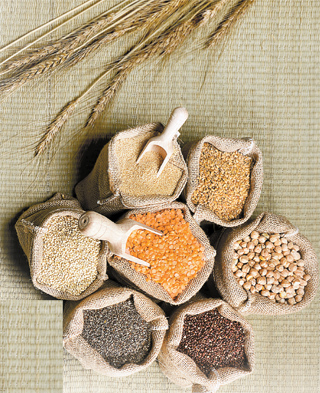 
Rice and barley used to be the few available grains found on Korean dining tables, but a string of seeds such as quinoa, lentils, chickpeas and amaranth are replacing long-time local staples these days.

They are even sold at traditional markets, which usually cater to older housewives in their 40s and 50s.

“I was surprised to find pouches of lentils when I recently visited a traditional market in my neighborhood,” said Lim Mi-ah, a 34-year-old working mother who lives in Yongin, Gyeonggi.

“It’s hard to find young people like me at the traditional market, but one vegetable salesperson had packs of lentils. That’s when I realized that lentils are really in.”

It also seems like almost every company is capitalizing on the popularity of exotic grains.

Some grains such as quinoa have been popular among health-conscious young housewives in their 30s and 40s or vegetarians in search of high-quality protein sources, but they were not especially sought-after until singer Lee Hyo-ri uploaded a picture of a simple meal onto her blog in late May.

Three images of a breakfast consisting of boiled lentils stir-fried in olive oil and vinegar brought the grains into the mainstream for ordinary Koreans.

According to import statistics released by the Korea Customs Service, 64 tons of lentils was imported to Korea in January, a number that dropped to 10 tons in February.

However, after Lee blogged about lentils in late May, 67 tons of the grain was imported in June, a number that soared to 878 tons in July. In August, 1,656 tons of lentils were unloaded in Korea.

Riding on the popularity of lentils, other grains grown overseas also came into the spotlight because they are mostly rich in protein and dietary fiber, and are therefore suitable for people who care about their diet.

For example, lentils have a high percentage of protein and 12 times more dietary fiber than a large banana.

According to Cheongrim Life, which recently published the cook book “Lentil Diet Recipes,” a lentil is made up of 30 percent dietary fiber - higher than any other grain.

When food is rich in dietary fiber, it stays in a person’s stomach for a longer period of time, keeping them full and satisfied for a longer time.

If you want to replace your rice or barley with these grains, health experts say you need to know what benefits and disadvantages each type has.

Among super grains, lentils are probably the most accessible in terms of price and taste. They don’t have a unique taste and are relatively cheap compared to other grains. Prices vary depending on retailers, but one kilogram of lentils is priced between 5,000 won and 6,000 won ($4.70 and $5.60) on average.

Many Koreans cook lentils with rice, but they are enjoyed in soups or curries in other countries. 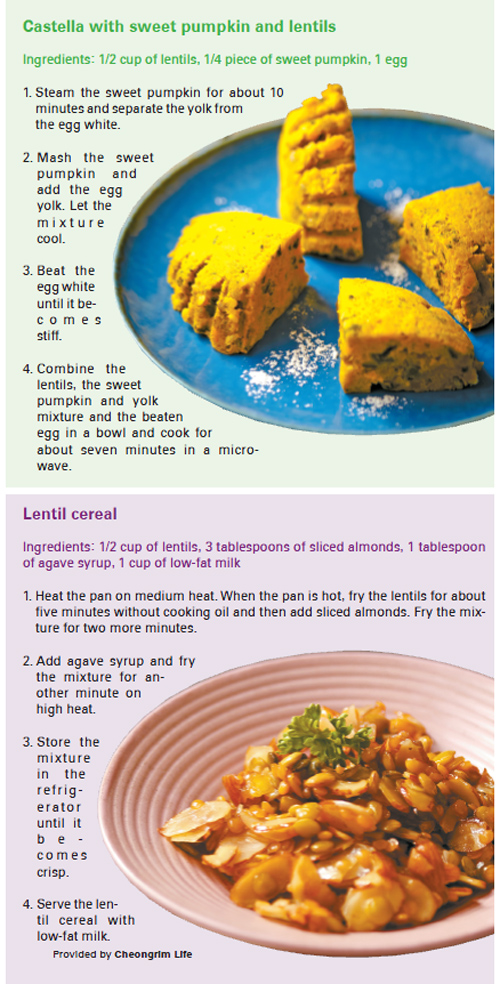 Quinoa, well known for its nutty taste and chewy texture, is currently gaining the most world recognition among all these super grains because the United Nations Food Agriculture Organization designated last year as the international year of quinoa.

First grown and eaten in Latin American countries such as Bolivia, Chile and Peru, quinoa is now enjoyed worldwide. Even the National Aeronautics and Space Administration announced that it would include quinoa as a candidate crop for its controlled ecological life-support system.

Quinoa also has many health benefits. The grain is high in protein and calcium. Per 100 grams of quinoa, there are 14 grams of protein and 56 milligrams of calcium. Because it is gluten free, it is ideal for people who are allergic to wheat. It is often used as a substitute for wheat for those who bake at home because of this.

Unfortunately, the popularity of the grain has had a detrimental effect on its area of origin.

Shin Hye-yun, the author of vegetarian cookbook “This Tasty and Awesome Vegetarian Diet,” said, “Quinoa used to be a humble grain that is enjoyed by ordinary people, but as its prices go up, people living in Peru and Bolivia who used to live on quinoa don’t even dare to eat it these days.”

Oats are also seen as a health-conscious choice because eating them lowers the chance of heart-related diseases. Oats have been chosen as the world’s top 10 healthiest foods by the World Health Organization.

Chia seeds are also popular as diet food, especially among young women. Chia seeds entered public consciousness after some Hollywood celebrities introduced the grains as their dieting secret.
With many companies selling these grains from overseas, they are oftentimes advertised as cure-alls.

But health experts say they don’t suit everyone.

“Our staples are overloaded with carbohydrates,” Lee Yun-gyeong, a professor of internal medicine at Chaum Clinic, told the JoongAng Ilbo, an affiliate of the Korea JoongAng Daily, earlier this month.

“If you consume these foreign grains while cutting back on rice, noodles, bread and rice cakes, it’s fine.

“But if you eat super grains while sticking to your original diet, it will disrupt the balance of your meal.”

Lee also added that foods high in protein are excellent for children, but seniors or people who have digestive problems should refrain from eating protein-rich grains.

Quinoa, lentils, amaranth seeds, which are also high in potassium, are ideal for ordinary Koreans who tend to eat salty foods such as bean paste, red pepper paste and kimchi, but they are akin to poison for people who have kidney problems.

If you are well aware of the good and the bad sides of these grains, then read on and try out some simple recipes we recommend. Each serves one person.