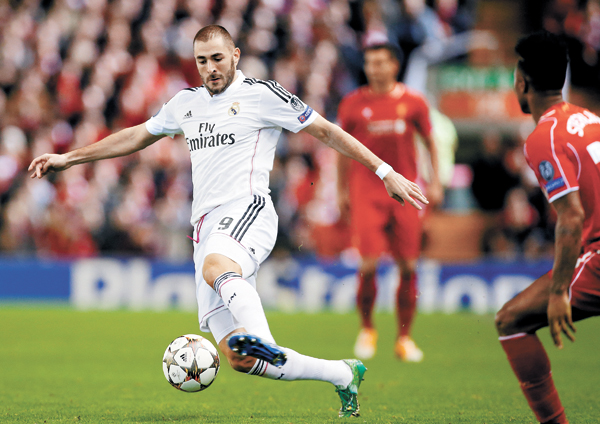 Cristiano Ronaldo scored his 70th Champions League goal and Mario Balotelli again failed to deliver as Real Madrid cruised to a 3-0 win at Liverpool on Wednesday to take control of Group B with a third straight win.

Elsewhere, Arsenal scraped by with a 2-1 win at Anderlecht with late goals from defender Kieran Gibbs and forward Lukas Podolski.

German teams continue to score for fun, as Borussia Dortmund romped to a 4-0 win at Galatasaray the day after Bayern Munich’s won 7-1 win over Roma and Schalke beat Sporting Lisbon 4-3.

By contrast, it was a bad night for Italian champion Juventus, which slumped to a surprise 1-0 defeat against Greek side Olympiakos.

At Anfield, all eyes were on Ronaldo but it was Karim Benzema - usually Ronaldo’s favorite goal supplier - who out-scored his more illustrious teammate.

The French forward grabbed the other two goals in a devastating 18-minute first-half stretch that silenced the home crowd.

“We are fighting very hard to repeat our success of last season,’’ said Madrid Coach Carlo Ancelotti, whose team has won its last eight matches, scoring 35 goals. “We are playing well and have a huge desire to make that happen again.’’

Ronaldo’s goal, a superbly taken flick, put Madrid ahead in the 23rd minute, and took him to 20 goals in 13 games this season. He also moved to within one goal of former Madrid star Raul Gonzalez’s record tally in the Champions League.

He is one ahead of great rival Lionel Messi, who scored one and made one in Barcelona’s 3-1 win against Ajax on Tuesday, before being taken off to rest ahead of Saturday’s game against Ronaldo’s Madrid.

Benzema headed in the second in the 30th minute before pouncing from close range.

Since joining from AC Milan, he has only scored once in 10 games and, to make matters worse, was substituted at halftime, even swapping shirts with his marker, Pepe, while walking to the dressing rooms.

“It’s not something I stand for,’’ an angry Liverpool Manager Brendan Rodgers said. “If you want to do that, for me you do that at the end of the game. It’s something I’ll deal with.’’

Liverpool, with three points from three matches, is locked with FC Basel and Ludogorets for second place.

Ludogorets got a first ever win by a Bulgarian side in a Champions League group thanks to a 91st-minute winner from defender Yordan Minev.

Striker Pierre-Emerick Aubameyang scored twice inside the first 20 minutes, Marco Reus made it 3-0 before the break and substitute Adrian Ramos completed the rout late on to give Dortmund nine points.

“We were focused, had no problems in defense and our fast breaks were very dangerous,’’ said Dortmund’s World Cup-winning German defender Mats Hummels.

Although Arsenal is not dominating games, it is at least showing resilience.

After rescuing a point with an injury-time goal from Danny Welbeck in a 2-2 draw against Hull last weekend, this time Gibbs and Podolski gave coach Arsene Wenger a happy ending to his 65th birthday.

“We are in a strong position now,’’ Wenger said. “It is down to us now and we have to win our home games.’’

Third-place Anderlecht, which has one point, sensed victory after Honduras midfielder Andy Najar gave the Belgian champion a 1-0 lead with a powerful header which wrong-footed Arsenal’s third-choice goalie Emiliano Martinez in the 71st minute.

But Gibbs equalized in the 89th with a low volley and Podolski, who was close to leaving Arsenal during the offseason, followed up from close range in stoppage time after a cross from the impressive Alexis Sanchez got deflected.

In Group A, Spanish champion Atletico Madrid leads Olympiakos on goal difference, with both teams tied on six points and Juventus lagging three points behind.

It was a goal feast for Atletico, with five different scorers in a 5-0 win against Malmo to show there is indeed life in the team’s attack after Diego Costa, who has been brilliant for Chelsea since joining the London club in the offseason. AP