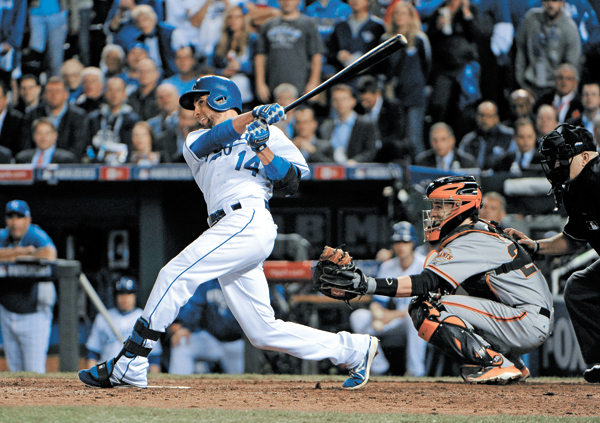 Royals second baseman Omar Infante hits a two-run home run against the San Francisco Giants in the sixth inning of Game 2 of the World Series at Kauffman Stadium in Kansas City. [USA TODAY/NEWS1]

Salvador Perez shouted at Hunter Strickland, who shouted right back. The Kansas City Royals streamed from their dugout, the San Francisco Giants from theirs. And for a tense moment in the sixth inning Wednesday night, Kauffman Stadium was consumed by chaos.

The one thing that was clear? The World Series suddenly had some life.

Perez broke open Game 2 with a two-run double in a five-run sixth, and the Royals’ cast of clutch relievers kept the Giants in check for a 7-2 victory that spiced things up as the Series shifts to San Francisco for three games.

“We showed them that we have fight in us, and I think they knew that already,’’ said Billy Butler, whose RBI single in the sixth inning gave the Royals a 3-2 lead. “But we stepped up big there as a team, and that gave us some confidence.’’

Jeremy Guthrie will be on the mound Friday night local time for the Royals, who had won eight straight playoff games before a 7-1 loss in the opener. Tim Hudson will start for San Francisco.

“With their pitching and our pitching, and the way both teams play, we’re going to have a fight, I think, every game,’’ said Giants Manager Bruce Bochy.

So much talk of fighting after the two teams nearly came to blows Wednesday.

The Royals had surged ahead on Butler’s single when Perez followed with a double off Strickland into the left-field gap. Omar Infante then scorched a pitch into the bullpen in left, the fifth homer that Strickland had allowed to 23 postseason batters.

Boiling over with anger, Strickland yelled into his glove then got into a shouting match with Perez as the big, burly catcher headed for home. Players spilled out of both dugouts, and several Royals streamed in from the outfield bullpen before umpires restored order.

Strickland said he simply let his frustration get to him. “I let the team down,’’ he said. “My emotions got to me.’’

Royals flamethrower Yordano Ventura allowed two runs while pitching into the sixth inning. The 23-year-old protege of Pedro Martinez hardly looked like the first rookie to make a World Series start for the Royals, calmly handling a lineup that had ravaged staff ace James Shields.

The dynamic trio of Kelvin Herrera, Wade Davis and Greg Holland did the rest.

Herrera got the final two outs of the sixth to escape a jam, his first three pitches clocking at least 100 miles per hour. He also survived a shaky seventh before Davis breezed through the eighth.

Greg Holland, who saved each game in the Royals’ sweep of Baltimore in the AL Championship Series, allowed a two-out single to Brandon Crawford before fanning Gregor Blanco to end the game.

The Giants’ only runs came on a homer by Blanco and double by Brandon Belt, their streak of seven straight World Series wins ending on a crisp, breezy night.

The fleet-footed Blanco silenced a rollicking sea of blue, becoming the 10th player to open a World Series game with a home run. He deposited Ventura’s 98 mph fastball in the bullpen in right field, just his 17th home run in more than 2,300 at-bats.

The crowd, energized from the moment that Hall of Famer George Brett delivered the ceremonial first pitch, was left waiting for something good to happen for the second straight night.

This time, the scrappy Royals gave it to them.

The Royals kept the pressure on in second. Infante doubled over the head of Travis Ishikawa in left field, and Escobar sliced a two-out double down the right-field line to give Kansas City a 2-1 lead, its first in the World Series since Game 7 in 1985.

The Giants, so accustomed to October baseball, refused to back down.

Belt tied it in the fourth with a double that bounced off Nori Aoki’s glove in right field.

The game was still knotted at 2 when the Royals got their first two batters aboard in the sixth. Bochy pulled the fiery Peavy. Butler promptly hit a go-ahead single off Jean Machi, and Strickland came in two batters later.

From there, well, the Royals showed they still had plenty of fight left. AP