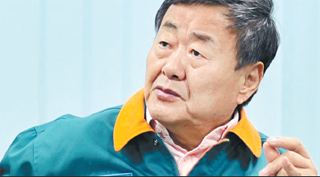 Dongbu Group Chairman Kim Jun-ki lost most of his stake in the group’s Dongbu Steel yesterday nearly three weeks after creditors unanimously approved a normalization plan that included a debt-to-equity swap and a capital reduction of shareholders.

Korea Development Bank (KDB), one of the major creditors, said the company and creditors signed a memorandum of understanding Wednesday that involved creditors investing about 600 billion won ($568.2 million) in the company while cutting Kim’s shareholdings from 36.94 percent to less than one percent.

The agreement also extended the deadline for the company’s debt payments.

The nation’s fourth-largest steelmaker faced a serious financial crisis after a 1.3 trillion won investment in an electric furnace business in Dangjin, South Chungcheong failed in 2009.

Kim tried to raise funds by putting his own assets up as collateral, but as the company failed to raise enough funds, it agreed to co-manage the company with creditors on June 30.

The company only paid employees’ half of their salaries this month and couldn’t pay its electric bills.

KDB said the creditors will inject about 300 billion won of their investments into the company today, but they are still discussing how Kim will be treated.

Earlier this week, employees of Dongbu asked creditors to allow Kim to keep running the company, but they rejected the request.

Sources in the industry said the creditors are considering letting Kim work as a management consultant for Dongbu.

“The creditors thought it wasn’t right for Kim to continue to manage the company,” a spokesman of the KDB said. “But they think giving Kim a chance to take part in the normalization process is fine. If he contributes greatly, the creditors might consider giving him the option [to buy back the shares he lost].”

“I feel very sorry to inform you that I’m stepping down from Dongbu Steel’s head post,” Kim told employees in a farewell e-mail. “I have tried everything I could to save the company, but there is nothing else I can do now.”