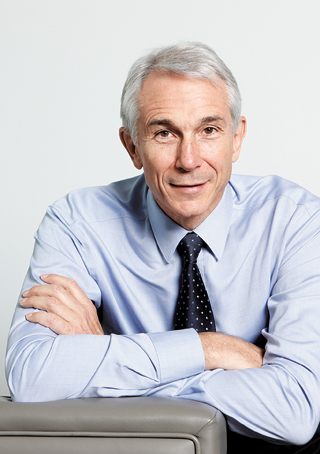 Tony Tyler leads the International Air Transport Association, which represents about 240 airlines. He is the former CEO of Cathay Pacific Airways. Provided by IATA

Tyler, who leads the association that represents about 240 airlines comprising 84 percent of global flights, was in Korea last week to speak at the 15th World Knowledge Forum.

While promoting the importance of aviation, the 59-year-old Briton also emphasized that air travel is “extremely safe,” saying the chance of being involved in a major accident was one in 2.4 million in 2013.

However, he admitted that accidents happen, citing the Malaysia Airlines plane that disappeared en route from Kuala Lumpur to Beijing in March and another that was shot down over the Ukraine in July.

For Koreans, the Asiana Airlines crash in San Francisco in July 2013 remains a painful memory. The government has launched its own investigation of the accident, which killed three and injured about 180, and expects to announce a punishment for the carrier next month.

Asiana’s situation has been a hot issue in the local airline industry. Last week, Korean Air Lines, which had its flights suspended in the late 1990s, urged a similar suspension of Asiana flights to San Francisco. Meanwhile, 43 carriers sent a petition to the Ministry of Land, Infrastructure and Transport encouraging leniency.

Under law, the ministry can give a 90-day suspension, and Asiana has asked for a fine instead.

But Tyler, who has spent more than three decades in the airline industry, said that in principle, the Korean government is taking the “wrong approach.” He claimed penalizing airlines is “counterproductive” for promoting safety in an industry that focuses on transparent reporting and data gathering.

“The important thing about an accident or any safety incident is that you have to learn from it and prevent it from happening again,” Tyler said on Oct. 14. “If you start to penalize airlines for incidents caused by human error, then humans are going to react by trying to cover up any such incidents. So this means we won’t hear and learn from it.”

The former CEO of Cathay Pacific Airways said suspension of flights wouldn’t hurt just Asiana, but also other businesses around the world.

“The economic impact would be way beyond Asiana as hotels, restaurants, travel agents and tourist attractions would suffer, too,” he said. “What I’m telling you is not just my theory, but a proven fact throughout the industry for 100 years.”

Tyler, who has led IATA since 2011, also expressed concerns about the Korean government taxing the airline industry.

The revision of the Local Tax Exemption Act of Limitations means that starting next year, airlines no longer will get a tax break on the purchase of aircraft. Although one lawmaker has filed a bill that aims to extend the aircraft purchase exemption until 2017, it is unclear whether it will be approved by the National Assembly.

Tyler said taxing airlines is “very short-sighted,” considering the opportunity cost. He emphasized the importance of the aviation industry to the Korean economy.

According to Oxford Economics, a U.K.-based advisory firm, he said, aviation and aviation-related tourism support half a million jobs in Korea and represent 2.2 percent of GDP.

“The government should look at aviation as an economic enabler, facilitator and driver of growth, not a tax cow to be milked at every opportunity,” said Tyler. “If government is taxing aviation, it’s a tax on the ability of Korean businesses to connect with the rest of the world.”

Transport Ministry data showed a record of 60 million-plus airline passengers in Korea this year through September.

Addressing concerns that Incheon might lose its status as a hub with an increasing number of direct flights and more airports in Asia, Tyler said there will be challenges.

“Frequently, talk about end of a successful hub is heard, but most often time it’s pretty exaggerated,” he said. “A powerful hub will remain as powerful if conditions like enough capacity, holding the line on airline costs, and embracing airlines that have strong brands while maintaining a desire to explore new markets are kept in place.”

As for the Ebola outbreak, Tyler said that if a “normal sense of precaution” is followed, there is no reason to suspend flights to affected areas, although it is each individual airline’s decision. Starting in September, KAL suspended flights to Nairobi, although Kenya is far from the West African nations where the Ebola outbreak hit hardest.

“We’re urging our members to follow World Health Organization guidelines and advice,” said Tyler, who was born in Egypt. “The WHO is urging airlines and stakeholders to keep their services ongoing because it is important to the effort to fight the disease for health workers to be able to come and go, bring essential medicine and equipment, and keep affected countries piped into economy.”

This year marks the 100th anniversary of commercial aviation. Although two months are still left, Tyler summarized 2014 as a “sad, but encouraging year.”

“It’s been a sad year, particularly because of the two Malaysia Airlines incidents, but you need to keep in mind that it still has been a safe year compared to other years,” he said. “Financially, this year has been another steady year of recovery.”