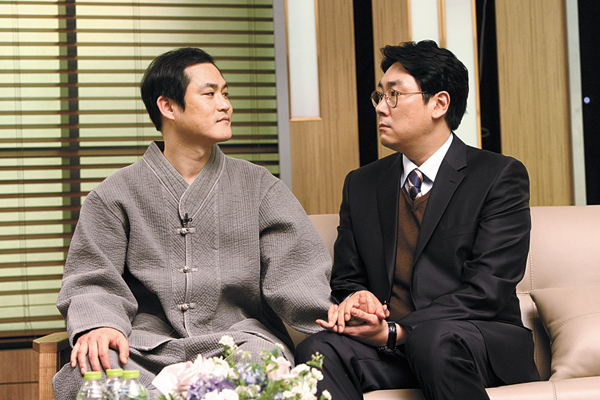 Director Jang Jin of “Man on High Heels” (2013) is back, but this time with a comedy. In the film, actors Jo Jin-woong of “The Admiral: Roaring Currents” (2014) and Kim Sung-kyun of “Kundo: Age of the Rampant” (2013) team up to play two brothers separated as children who finally reunite 30 years later on a television program to find their birth mother. But soon after they meet, their mother, who suffers from Alzheimer’s, suddenly disappears and their journey to find her begins.

The lives of the two siblings could not be more different. Jo Jin-woong plays Sang-yeon, who is adopted by an American family and becomes a pastor, while Kim Sung-kyun portrays Ha-yeon, a professed shaman. The brothers often come into conflict over their spiritual beliefs and Sang-yeon’s lack of Korean proficiency. Resolving these issues makes for a heart-warming story, however, and through their journey the two brothers come to understand their differences.

Directed by David Fincher of “The Social Network” (2010) and based on the global best-seller by Gillian Flynn, “Gone Girl” has garnered international acclaim. The film starts cryptically. On his fifth wedding anniversary, Nick Dunne (Ben Affleck) comes home to a broken coffee table and his wife Amy (Rosamund Pike) gone. He reports Amy’s disappearance, but evidence soon surfaces to suggest she was murdered, turning Nick into the prime suspect and making him the subject of a media circus.

The movie jumps between past and present, and the story alternates between the viewpoints of Nick and Amy. At first the couple appears happy, with no apparent issues or rifts. But financial problems and conflict soon push their relationship to the brink. This neo-noir film ultimately revolves around the couple’s dishonesty with each other, raising the question: Do we ever really know our partners?

Director Park Bum-soo admits that his new film is based on his personal experiences in pornography. Before his mainstream debut, Park made over 270 adult movies.

The film tells the story of Eun-soo (Ko Joon-hee), a once-famous child actress who has long been out of the public eye. She meets Jung-Woo (Yoon Kye-sang) by chance and the two become good friends. Jung-woo has always dreamed of being a film director, but his boss has never given him the opportunity. To stay at the company, he directs pornographic films while continuing to dream about making it big.

Eun-soo and Jung-woo eventually collaborate to make a film together, but after a misunderstanding they part ways. Later on, viewers see Eun-soo as a rising star, with Jung-woo is still producing pornography.

The two reunite when Jung-woo invites Eun-soo to a film festival where the film they made together will be shown. The plot seems simplistic but has all the trappings of a rom-com. Not just a love story, it also provides lots of laughs along the way and a tender message to those who may feel a bit lost.

Richard Linklater chronicled an 18-year romance in “Before Sunrise” and its sequels, “Before Sunset” and “Before Midnight.”

This time, he explores the coming-of-age of an American boy named Mason, who the director intermittently films over the course of 12 years to create a touching commentary about love and life.

The story begins with 6-year-old Mason Evans, Jr. (Ellar Coltrane) and Samantha (Lorelei Linklater), who live with their mother Olivia (Patricia Arquette) and only see their father Mason, Sr. (Ethan Hawke) once a week. Over 12 years, from childhood to adolescence, Mason, Jr. and Samantha move from place to place with their mother. The film primarily reflects on Mason’s conflicting emotions as he matures.

It also illustrates the conflict within a typical American family and the life of boy in flux.

Moreover, it shows the process over which a man and a woman grow into parents.

The mindscape referenced in the film’s title is a method through which one person accesses another person’s memories to find clues in criminal investigations - an attractive plot line for moviegoers looking for something fun and light.

The story begins when John Washington (Mark Strong), famous for his mindscape abilities, is tapped to work on a case involving a wealthy teenager, Anna Greene (Taissa Farmiga).

Upon meeting her, he realizes she is a brilliant but troubled girl, and possibly dangerous.

But the memories from the 16-year-old that he witnesses are different from the accounts others have told him.

To find the truth, he enters deeper into her mind only to become more confused.

However, it soon becomes apparent that Anna may not be as innocent as she seems.

The movie is introduced as thriller, similar to the 2010 hit “Inception.”

The Truth Shall Not Sink

Lee Sang-ho, who co-directed “The Truth Shall Not Sink with the Sewol,” became a household name in the aftermath of the tragic maritime disaster. A social and political journalist, he received top honors from the journalists’ association of Korea.

The story of the tragic Sewol disaster and its 476 passengers is not over. The film depicts the struggles of the reporter, Lee Sang-ho, and the president of Alpha Diving Technology, Lee Jong-in. It also details the search to reveal the truth behind the situation surrounding the diving bell in the two weeks after the disaster.

In addition, the directors also show what happened at Paengmok Harbor, where problems were encountered with emerging new media.

The film shows how easily news can be distorted and how the race to reveal the truth is difficult.

The film appears hastily made, with weak graphics and captions and sloppy editing. But nevertheless, the film is impressive to watch and ultimately illustrates the growing presence of Korean documentaries on the local and international stages.