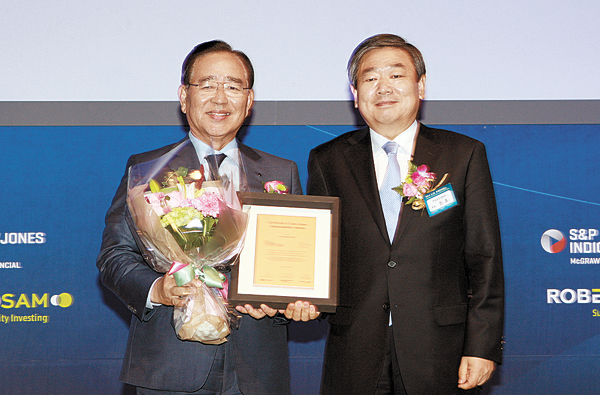 Shinhan Financial Group’s name appeared on the Dow Jones Sustainability Index (DJSI) World List for the second year in a row. This is the first time a Korean financial group has made it on the list for two consecutive years.

Since 1999, S&P Dow Jones Indices, the world’s biggest provider of financial information, and RobecoSAM, a sustainability investment specialist, have cooperated in producing the yearly DJSI. The indices include the world list, which focuses on global companies around the globe, and regional lists of the Asia-Pacific, Europe and the eurozone, North America and the United States. There is also the DJSI Korea Index, which only evaluates Korean companies. The indexes are used as a standard of socially responsible investing for many individual investors, banks and funds from all around the world.

The DJSI World List rates 2,500 global companies with the highest market capitalization on financial, environmental and social performance, and measures corporate responsibility and sustainability. This year, only 319 companies were included on the list, which is equal to 12.6 percent of all companies rated.

Within the banking industry, 25 companies - including Westpac, Standard Chartered, Citigroup, BNP Paribas and Barclays - made it onto the list. Shinhan is the sole Korean financial group on the World List. The group’s ethical management, financial accessibility, corporate philanthropy, financial stability and brand marketing were scored high.

Shinhan Financial Group expects positive influence on its brand value and its stock price by this year’s inclusion on the list.

“We were incorporated onto the DJSI World List for our endeavors to establish strategic, socially responsible management and transparent report on our performance,” said Han Dong-woo, chairman of Shinhan Financial Group.

“We will continue our strong growth by providing warmhearted and high-quality financial services for the coexistence of Shinhan, consumers and the community.”