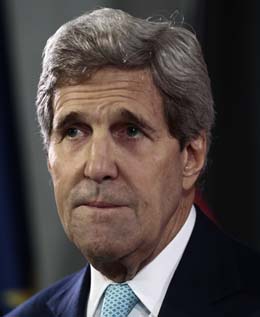 
South Korea’s foreign minister yesterday attempted to dilute remarks by U.S. State Secretary John Kerry just a day before about a possible cut in American troops on the Korean Peninsula, explaining that the comment was meant to coax North Korea into participating in denuclearization talks.

Speaking in Berlin on Wednesday, Kerry expressed hope that a discussion with Pyongyang on denuclearization could eventually resume and that the United States could ultimately begin to reduce its military presence in the region.

“We’ve said from day one that if North Korea wants to rejoin the community of nations, it knows how to do it. It can come to the talks prepared to discuss denuclearization,” Kerry said. “And the United States is fully prepared - if they do that and begin that process, we are prepared to begin the process of reducing the need for American forces and presence in the region because the threat itself would then be reduced.”

“We hope that the dynamics can develop in the next weeks, months perhaps, where we could get back to talks,” he added. “And the United States is absolutely prepared to do that.”

The two Koreas, China, Japan, Russia and the United States have participated for years in what are known as the six-party talks, but the dialogue saw little progress. The North, in the meantime, has conducted three nuclear tests.

“We need some indication from Kim Jong-un and the regime that they are, in fact, prepared to talk seriously about the central topics of the talks, which is the issue of denuclearization. We do not want to return to talks just for the sake of talks - we’ve been there before,” Kerry said.

Since the 1950-53 Korean War, the United States has continued to station troops in South Korea, while the North has consistently demanded that those forces be withdrawn.

Currently, 28,500 U.S. troops are stationed in the South, and Pyongyang has continuously used the U.S. military presence as an excuse to develop nuclear arms.

South Korean Foreign Minister Yun Byung-se, who was in Washington for high-level security talks, said yesterday that Kerry was not talking about any troop cuts in the near term.

“He was urging North Korea to give up its nuclear weapons as soon as possible,” Yun said. “The reduction of the U.S. Forces Korea is an issue that can be discussed in the distant future when the North’s denuclearization is being actualized.”

When asked if North Korea’s recent release of an American detainee could be linked to the resumption of stalled denuclearization talks, Korea’s foreign minister added that the incident was not enough to conclude that the reclusive country had changed its attitude.

Jeffrey Fowle, an American citizen from Ohio, was arrested in May for leaving a Bible at a sailor’s club while on a trip to North Korea. He was freed Tuesday and flown home on a U.S. military plane. Two more American citizens, Kenneth Bae and Matthew Miller, remain in Pyongyang’s custody.